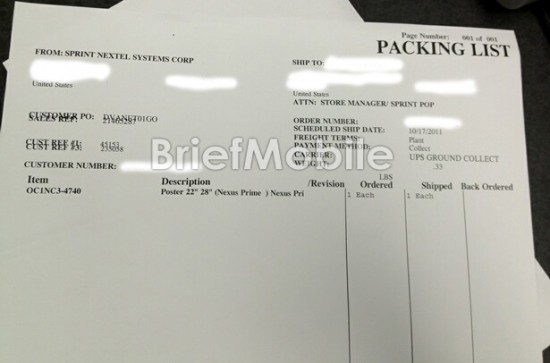 It’s at this point that I turn my attention to Sprint customers, and give them a thumbs-up, signifying the beginning of celebration. That’s right, you might be getting some Galaxy Nexus love as well, according to a leaked shipping list. The list has one single item on it: a poster advertising the “Nexus Prime,” which we all know as the Galaxy Nexus. Now, we have to stress that this isn’t concrete, and it could just be something fabricated, so we advise everyone to take it with a grain of salt until more information comes in.

So, what can we infer from this rumor, other than the fact that Sprint apparently uses UPS Ground shipping? Well, if it is indeed true, the Now Network will be getting the Galaxy Nexus in the near future, most likely with some form of 4G connectivity. Keep in mind that Sprint is planning a switch to LTE by 2013, so they may release the device with LTE onboard. Again, this is all smoke and mirrors at the moment, but it’s nice to dream, isn’t it?

So, do we have any Sprint customers out there that are holding off for a possible Galaxy Nexus? Anyone not impressed with the device? Sound off in the comments below!