A few days ago, a rumor came out that Samsung is planning to launch four variants of the Samsung Galaxy Note III. We took the rumor with a grain of salt and decided to move on, but now something appeared at Samsung’s website which is making us scratch our heads again. 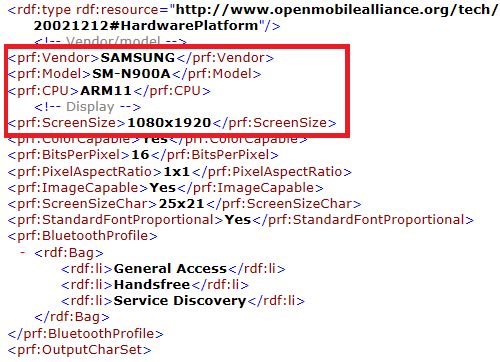 Two devices with model number SM-N900A and SM-N900T can be found in the UAProfiles over at Samsung’s official website. Last month, model number of the Galaxy Note III was leaked which is SM-N9000, so this pretty much tells us that the models mentioned above are related to the Note III.

As showed in the image above, Note III will feature a Full HD(1920×1080) display. What we can assume from this is that not four, but maybe just two versions of Note III are coming ‘or’ there’s also a possibility that both model numbers are used for the same phone. As I always say, lets wait for the company to let the cat out of the bag.

What do you think about it? There will be different variants of Note III? Tell us about it in the comment box below