The Galaxy S5 is the new crown of one of the leading smartphone brands in the world, Samsung. Samsung is currently shipping millions of units of the Galaxy S5, but it seems they might see a little bump in the sale because the all new HTC One is here. The new HTC One is better than its predecessor in a lot of things, and one of them is the improved design. Anyway, detailed comparison between the HTC One and Samsung Galaxy S5 is given below. Which phone is better for you? Read and decide. 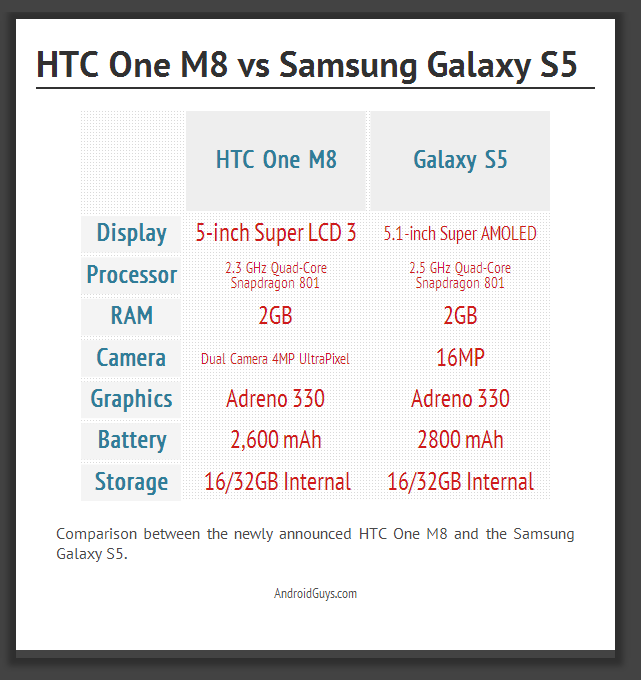 Starting from the display, the screens on both phones are excellent. HTC One features a 5-inch 1080p display, and the S5 also have a 5.1 inch 1080p display. The pixel density on HTC One is higher than that of S5, but the main point is that you wouldn’t be disappointed with either display as they both are great. But now comes a point where Samsung always fail and HTC always win. If you are a person who’s priority is build quality, then the new HTC One is made for you. Its brushed metallic back and aluminum unibody design is something to die for. While on other hand, Samsung S5 gives a plasticy feel, which is in my opinion, a con. About the weight, the S5 is only weighs 145g, whereas the One weighs 160g; also the S5 is 8.1mm thick versus the HTC One M8’s 9.4mm.

Though the S5 seems to win in the battery category, we can’t hand it to it just yet. With HTC’s new “Extreme Battery Saving Mode”, HTC reported that the phone can have as much as two full weeks of standby time. We still need to test that out, but it seems as though HTC takes the cake on this one.

The camera is where this gets a bit tricky. Based solely off of specifications, the Galaxy S5 is the clear winner in this category with its 16MP rear-facing camera and 2MP front-facing camera. It has Phase Detection Auto-Focus, Real-Time HDR, and Selective Focus Mode. Sounds great, right? It may be, but HTC has something hiding up its sleeve when it comes to cameras. The One has a 4.1 UltraPixel rear-facer, complete with a depth sensor to complete the pair. It also totes a 5MP front-facing camera for exceptional selfies. The 4.1 UltraPixel camera may not jump out at you right away, but the depth sensor is what makes the pair. The second sensor is there to create a certain depth that just isn’t possible with a single lens. It gives you the ability to focus your shot after the photo is taken, and gives the photo a nice bokeh effect.

In all, if you need the best camera specifications, go with the S5. Though the One has some nice features and is a step up from last years model, we’d still give it to Samsung on this.

Starting with the software, both devices are running on Android 4.4 KitKat, but over that, both devices have their own user interfaces. HTC One features the all new HTC Sense 6.0, which will allow you to personalize Blinkfeed and change the theme.

Perhaps the most exciting thing is the Motion Launch gestures. The phone can be switched on by double-tapping the screen, holding the phone in landscape mode or pressing the volume key opens the camera, and the motion controls which automatically detects when you pick up the phone. On the other hand, Samsung has almost always put motion gestures into the software of their Galaxy S line. Not to say they aren’t up to par, but it seems as though HTC put functional gestures into their newest handset, whereas Samsung put just about every gesture feature they could think up, no matter the functionality.

The S5 comes with Samsung’s TouchWiz user interface, and this one is the most recent version. They have slimmed down the interface a bit, getting rid of the cluttered UI that seemed to get so many complaints in the Galaxy S4. The Galaxy S5 has a heart rate monitor, which is great for people who care about fitness and working out. It also has a fingerprint scanner that allows you to unlock the phone, so security-wise, the S5 got the edge.

Samsung Galaxy S5 is a great handset, with a great battery life and a strong processor under the hood. But we have to say that HTC One is not just yet another smartphone. It is a strong contender, and it will give a hard time to the likes of S5, Xperia Z2, and Nexus 5 owners. As I said above, if you are into design, the HTC One is for you, but if you are looking for something which is better in security, slim, and light in weight, then the Samsung Galaxy S5 is for you.

It’s all about your preference, because there are a lot of things to choose from. Some people like Samsung’s TouchWiz skin, while others are happy with HTC’s Sense UI. But I will say that at the end of the day, if you buy the Samsung Galaxy S5 or the new HTC One, you wouldn’t be disappointed.

Jimmy Westenberg contributed to this article. 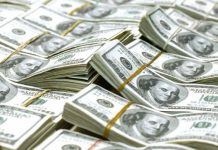 Which unlimited plan is right for you? Here is everything you need to know