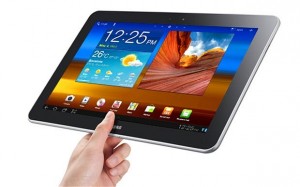 Well what do we have here? Apple actually gaining ground on one of it’s many ridiculous lawsuits? That’s the current case in Europe. The Regional Court of Dusseldorf has granted a preliminary injunction against the sale and marketing of the Tab meaning it now has to be taken off the shelves across Europe (excluding the Netherlands)  just a week after going on sale in Britain. According to some retailers the Tab has been the fastest selling tablet since the iPad 2 in the UK.

The judge backed Apples claim that the Tab 10.1 infringed on some of their patents and copied elements of the iPad 2. Samsung can appeal the case but the ruling will stand in the meantime and if appealed will be heard by the same judge in about 4 weeks time. An Apple spokesperson had this to say:

It’s no coincidence that Samsung’s latest products look a lot like the iPhone and iPad, from the shape of the hardware to the user interface and even the packaging. This kind of blatant copying is wrong, and we need to protect Apple’s intellectual property when companies steal our ideas.

This is the second time Apple has achieved an injunction against Samsung’s rival tab, the first having its launch delayed indefinitely in Australia. While I can see the similarities between the Tab and the iPad 2 I do think the lawsuits are extreme; there are similarities between competing devices in technology all the time. Take TVs, cameras and laptops all look similar and just follow trends and there’s only so many ways you can design a tablet given their lack of physical buttons and similar size.

What do you guys think (Although I can already guess whose side you’re on!)? Are Apple right to gain an injunction? Or are they just looking to stifle all major competition and innovation? Let us know below or why not leave a comment on our Facebook Wall?