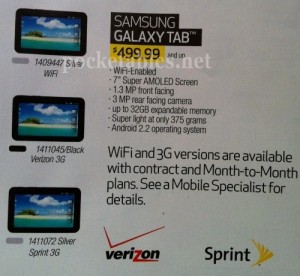 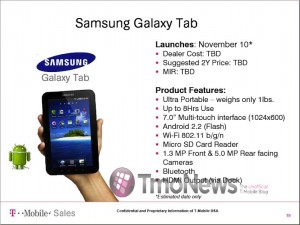 More news has surfaced today about the upcoming Galaxy Tab Android tablet.  First up is the news dropped by tmonews.com concerning the T-Mobile release date and pricing for Samsung’s new hotness.

TmoNews is reporting that they got verifications from sources that T-Mobile is going to be releasing the Tab on November 10th with a possible price tag of $399.  Not a bad price point for the unit, now if they would only include a dialer with that bad boy, it would be perfect. It is right in line with the announced Sprint price point, and about $200 cheaper than Verizon’s version of the unit.

Along with the above news, pocketables.com is reporting that Best Buy has begun advertising a WiFi only version of the Galaxy Tab for sale (coming soon).  Along with the WiFi version, Best Buy is saying that they will be carrying both the Verizon and Sprint 3G models as well.

Pricing Starts at $499, so we can assume that price point is what it is going to cost to be able to get the WiFi version of the Tab.  The big question on everyone’s mind is this price point competitive enough for people to choose the Tab over the iPad.  Time will tell, but I have to admit I am a bit skeptical.  If the carriers can figure a way out to put dialers on their units, then yes, this unit will be an iPad killer.  If it is to stack up as a regular tablet against the iPad, I just don’t know. The tipping point may be the fact that the Tab will run flash and AIR, which are certainly advantages. More info as it rolls in.