EDITOR NOTE: This post was originally scheduled to go up earlier in the week, but was pushed back due to a server migration.Â  We understand Gameloft’s position has changed somewhat since the original news, but still feel obligated to share our opinions on Android gaming as a whole. 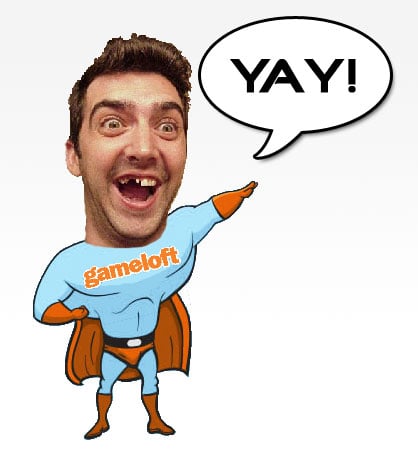 When I heard that Gameloft would be cutting back on development for the Android platform, I became enraged and dumbfounded. How could a company be so stupid? Let’s analyze this move and why it makes about as much sense as putting a trap door in a canoe.

“It is not as neatly done as on the iPhone.” – With the changes made to the Android Market in 1.6, this statement is a flat out slap in the face. We see that Google is clearly putting in their efforts to improve the market and bring it up to developer’s expectations. This is how Gameloft repays them? Are you kidding me? In 1.6, we now have better organization, more categories, and a nicer UI.

Just like the App Store, the Android Market now has screenshots of applications, as well as the ability to sort by the top paid, top free, and just-in applications. If that’s not as neatly done as the App Store, I don’t know what is. True, there’s no desktop application for managing your apps yet, but we’re talking about the ability to manage apps on the device itself, not via your computer. After all, what’s the point of a smartphone if you have to constantly connect it to another machine?

Let’s be honest. This reason is a load of bull. It’s just an excuse that Gameloft is using to shift focus from their real reason for cutting back (we’ll get to that later). More changes have been made to the Android Market in a single year than have been made to the App Store in a while. True, the App Store doesn’t really need to change much, but that’s not my point. My point is that Google is actively making changes to the Market in order to better accommodate companies like Gameloft. For them to use the excuse that it’s not as neat as the App Store is far from legit and outright childish.

“Google has not been very good to entice customers to actually buy products.” – See above. With changes to the layout of the market, more applications will get exposure. The top paid, top free, and just-in categories are sure to alleviate this issue.

With regards to Apple openly advertising their App Store with commercials and what-not, I definitely hear where Gameloft is coming from. But let’s be honest, if you have an Android phone, you’re gonna use the Android Market, which kinda makes Apple’s ads a mute point. It’s not like you have the option to use the App Store on an Android device.

It’s also just a matter of time before Android adoption is large enough for Google to make advertising the Android Market a worthwhile endeavor. I’m sure that day will come in the very near future. In the meantime, is this really that big of a deal? Advertise your own damn products, you indolent chassis of kvetching babies.

“On Android, nobody is making significant revenue.” – Are you kidding me? Paid apps in the Android Market have only been around for seven months, of course no-one’s making millions yet. Keeping that in mind, the Android Market has still seen a 53% increase in gross revenue over the past month alone. This is primarily due to the launch of new devices, as well as the new Market layout.

The top selling game, Robo Defense ($2.99), made just over $22,700 in October. While that’s not as much as apps are making in the App Store, it’s not chump change either. Forecasters expect the Android Market to see another 50% jump in revenue over the month of November and expect a very strong Q4.

The thing is, Robo Defense is not much when compared to the amazing games that Gameloft has put out. If Robo Defense can make over $20k, then I’m sure Gameloft can easily rake in some cash. Sure, it may not happen overnight, but it seems like a pretty sure thing. Give it some time guys. Patience is a virtue (or so I’m told).

So, here’s my take. Gameloft won’t come out and say it, but I will (it ain’t much of a secret). Android still has one fundamental problem. Storage. Everyone’s complaining about it, and no-one, except modders, care to solve it. When you buy an iPhone, you are granted a nice chunk of internal storage space for applications. With Android devices, you have a tiny amount of storage space and nice, big, microSD card to “make up” for it. Sadly, the microSD card doesn’t solve a damn thing, since you can’t store any apps on it (unless you root your device, which the average user will not do). It’s like giving someone a crutch for a broken arm. Sure, it’s nice to have if you, someday, break your leg, but what the heck is it doing for you now?

Gameloft’s best games are very large in size. They are, by far, the best games in the App Store (I’m addicted to them. Yes, I have an iPod Touch… Sue me). If phone manufacturers would just start giving Android devices a nice 8GB+ chunk of internal storage space, maybe we’d see Gameloft have a change of heart. And if not, well, at least we get more space for other cool stuff, right?

Come on Gameloft, just say it like it is, and maybe, just maybe, you’ll help push along hardware manufacturers to create a truly worthy Android device. Stop being a bunch of whining girls and step up your game. Unless… Apple paid you to cut back on Android development. Hey, I wouldn’t rule it out.

Either way, you’re a buncha cowards (and dumb too).