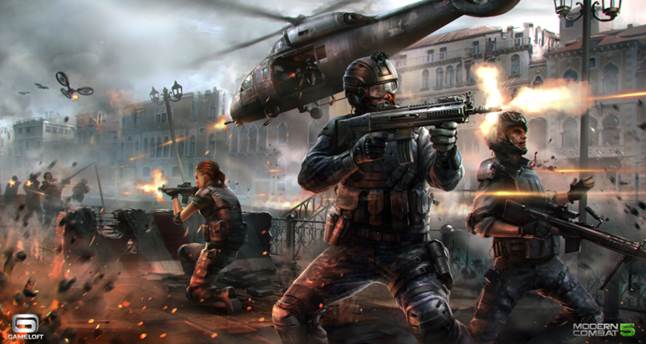 Gameloft this week announced that their upcoming Modern Combat 5 game will be optimized for MediaTek’s MT6592 processors. As the “first true octa-core processor in the world”, this SoC will deliver “enhanced definition and stunning graphics” in games and other demanding situations. Modern Combat 5 is not expected until early 2014; it will be offered through the Google Play Store.

The MT6592, MediaTek’s latest innovation, is the first true octa-core processor in the world, and Gameloft’s next title, Modern Combat 5, will be the first game optimized for the new chip. As mobile gaming moves toward highly detailed and realistic gameplay, the need for a higher performance chipset is required. Specific features of the new Modern Combat 5 include definition levels not seen before, especially in the technically difficult mediums of water distortion effects, reflections and shadowing.

Modern Combat 5 is a fast-moving, visually exciting action game played across various terrains and conditions. MT6592 allows for continuous scrolling in high definition with attention to detail from soft particle display to enhanced depth of field to create a more immersive experience.

“We’re thrilled to continue our collaboration with MediaTek,” said Ludovic Blondel, Vice President OEM at Gameloft. “This new octa-core system on a chip is focused on high performance and is one of the best mobile technologies on today’s market. We are delighted to showcase this innovative, high-end technology in Modern Combat 5, one of our most awaited games of 2014.”

“With the rapid development of mobile Internet applications and services, mobile gaming has become one of the leading value-added services for our customers and the best medium to experience the power of True Octa-Core with our MT6592 chip,” said Jeffrey Ju, General Manager of MediaTek Smartphone Business Unit. “Our partnership with Gameloft on Modern Combat 5 is a major breakthrough for the industry and gaming community, as we empower the ultimate gaming experience that can be enjoyed anywhere, anytime.”