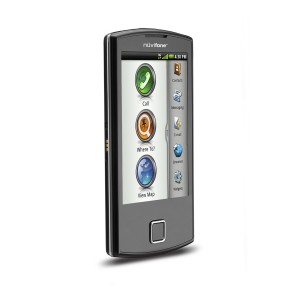 After more than a year of waiting, Garmin is set to show off their newly announced nuvifone A50 next week at Mobile World Congress.  As it turns out, the device is more GPS than phone.  Surprise!

The Android-powered A50 features a 3.5-inch,  HVGA capacitive touch screen, 4GB of built-in storage, Microsoft Exchange support, full GPS, and other navigation services built-in.  The touch only device also comes with an accelerometer, 3 megapixel camera, and the Android Market.  With a heavy dose of Garmin, it  includes an e-compass and their own cityXplorer maps, as well as real-time, location-relevant information like weather, traffic, fuel prices, safety cameras, and flight status.    Look for the A50 to arrive in Europe sometime in the first half of 2010.  Pricing and carriers have yet to be announced.