According to research firm Gartner, Android captured 50.9 percent of all smartphone sales in the fourth quarter of 2011.  Pulling just over half of all sales in the final three months of the year, it’s enough to double Apple’s iOS 23.8 percent share.  Symbian, for its part slid from 32.3 percent all the way down to 11.7 percent, still ahead of Blackberry and its 8.8 share.  Where’s Microsoft in all of this?  Scraping the bottom of the barrel at 1.9 percent.  Yep, below Bada. 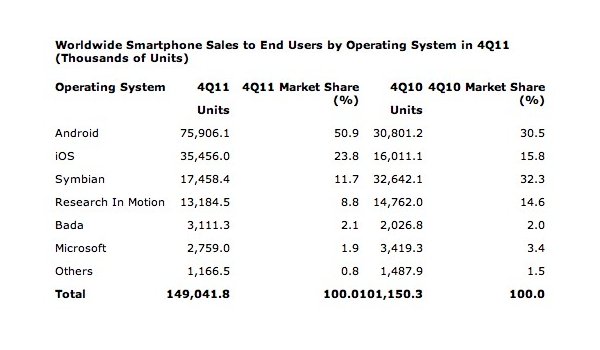 The quarter saw Samsung and Apple cement their positions further at the top of the market as their brands and new products clearly stood out. LG, Sony Ericsson, Motorola and Research In Motion (RIM) again recorded disappointing results as they struggled to improve volumes and profits significantly. These vendors were also exposed to a much stronger threat from the midrange and low end of the smartphone market as ZTE and Huawei continued to gain share during the quarter.

Worldwide mobile device sales to end users totaled 476.5 million units in the fourth quarter of 2011, a 5.4 percent increase from the same period in 2010 (see Table 1). In 2011 as a whole, end users bought 1.8 billion units, an 11.1 percent increase from 2010 (see Table 2). “Expectations for 2012 are for the overall market to grow by about 7 percent, while smartphone growth is expected to slow to around 39 percent,” said Annette Zimmermann, principal research analyst at Gartner.

In the fourth quarter of 2011, Nokia’s mobile phone sales numbered 111.7 million units, an 8.7 percent decrease from last year. “Samsung closed the gap with Nokia in overall market share,” said Ms. Cozza. “Samsung profited from strong smartphone sales of 34 million units in the fourth quarter of 2011. The troubled economic environment in Europe and Nokia’s weakened brand status posed challenges that were hard to overcome in just one quarter. However, Nokia proved its ability to execute and deliver on time with its new Lumia 710 and 800 handsets. Nokia will have to continue to offer aggressive prices to encourage communications service providers (CSPs) to add its products to portfolios currently dominated by Android-based devices.”

Apple had an exceptional fourth quarter, selling 35.5 million smartphones to end users, a 121.4 percent increase year on year. Apple’s continued attention to channel management helped it take full advantage of the strong quarter to further close the gap with Samsung, which saw some inventory build up for its smartphone range. Apple’s strong performance will continue into the first quarter of 2012 as availability of the iPhone 4S widens. However, since Apple will not benefit from delayed purchases as it did in the fourth quarter of 2011, Gartner analysts expect its sales to decline quarter-on-quarter.

After Apple, ZTE and Huawei were the fastest-growing vendors in the fourth quarter of 2011. “These vendors expanded their market reach and kept on improving the user experience of their Android devices,” said Ms. Cozza.

In the fourth quarter of 2011, ZTE moved into fourth place in the global handset market. ZTE posted a strong smartphone sales increase of 71 percent sequentially. The company was able to extend its portfolio to three CSPs in its home market and benefited from consumers’ interest in low-cost smartphones. Huawei moved ahead of LG in the Android marketplace to become a top-four Android manufacturer, thanks to strong smartphone growth in the quarter. Huawei has made significant progress in moving to its own-branded devices, and it has continued to expand its portfolio into higher tiers as its tries to build more iconic products.

RIM dropped to the No. 7 spot in the fourth quarter of 2011, with a 10.7 percent decline. RIM’s delay with its BlackBerry 10 platform will further impair its ability to retain users. However, RIM’s biggest challenge is still to expand the developer base around its ecosystem and convince developers to work and innovate with BlackBerry 10.

In the smartphone OS market (see Table 3), competition between Google and Apple intensified. Android’s share declined slightly sequentially. This was due to strong iPhone sales, driven in particular by the iPhone 4S in mature markets and the weakness of key Android vendors as they struggled to create unique and differentiated devices. Samsung remained the main contributor to Android share gains in the second half of 2011. iOS’s market share grew 8 percentage points year-on-year, but Gartner analysts expect Apple’s share to drop in the next couple of quarters as the upgrade cycle to the iPhone 4S slows. Nokia’s first Windows Phone smartphones, the Lumia 710 and 800, made their debut, but, as expected, sales were not enough to prevent a fall in Microsoft’s smartphone market share. 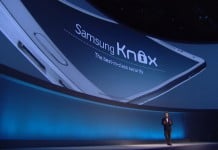