Gartner just tossed their latest report online today and, as the headline already tells you, Android continues to rule the roost.  With more than half (52%) of the market share, Android was by far the most preferred smartphone platform among buyers in the third quarter.  According to the figures there were more than 60 million Android handsets sold in third quarter, more than triple its closest rival, Symbian.  Compared to last year’s figures, Android has more than doubled its own footprint in the same time frame. 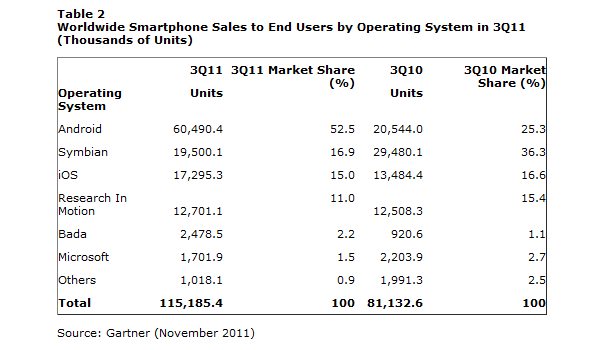 Smartphone sales, as a whole, reached 115 million units over the third quarter of 2011, up 42 percent from the same period last year.  In terms of specific smartphone vendors, Samsung is the number one provider, moving more than 24 million units.