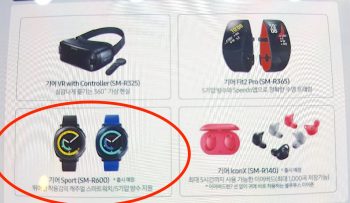 Samsung’s Gear S3 Frontier and Gear S3 Classic have both made positive waves among Android users, since Samsung gave the Gear S2 Android compatibility back in 2015 and continued this commitment last year. And, for all its success, we’ve not yet seen a Gear S4 in the works. What we have seen so far is the Gear Fit2 Pro leak on Samsung’s website after having received FCC certification with the full specifications. The Gear Sport has received FCC approval, too, though we’ve seen a diagram of the Gear Sport with the name “Gear Sport” on the wearable’s back – little else.

Now, the Gear Sport 2017 has leaked with a photo that not only shows its continuity with the Gear S2 and Gear S3 but also replaceable watch bands. The leaked photo shows the name “Sport” with model number SM-R600 and the choice of black or blue watch bands. Of course, these two watches with different-colored watch bands could refer to consumer choice of wristband color; however, we know that the current Gear S3 Frontier and Gear S3 Classic have interchangeable wristbands, and keeping this customization with the Gear Sport 2017 isn’t out of the question.

Samsung briefly teased the Gear Sport at the Galaxy Note 8 announcement in New York City on Wednesday, August 23rd, with the new wrist wearable headed for IFA 2017 in Berlin, Germany on August 30th. Perhaps Samsung will give the Gear Sport Samsung Pay support for on-wrist purchases as it has done for the Gear S3 Frontier and Classic.