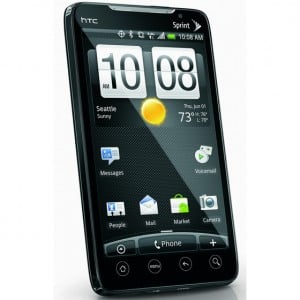 “I wouldn’t recommend an Android phone to my mother.”

That’s a phrase I’ve heard thrown around more than once since Android first came out, and up until recently, I was of that same opinion. That is until the Sprint EVO 4G came out.

A few weeks before the EVO was released, my parents were eligible for upgrades and wanted to know what phone they should get. I asked them what they wanted the phones to do and they met me with a blank stare. “A phone is a phone isn’t it? You just need to call and text. I don’t need that other stuff,” my dad said. But then my mom chimed in: “Well I would really like to get my email.” That was the pebble that started the avalanche of new things my parents wanted to do with their phones.

After further inquiry, the only other thing my mom said she would want would be a physical keyboard. Since we are on Sprint, I knew that meant she would want the Samsung Moment because it was the only phone that offered a keyboard. Unfortunately, the phone is quite out of date by today’s Android standards, but I was out of options since she insisted on the keyboard.

After going to the store and picking up the phone and setting it up, email and all, I realized that I never really told her what was so special about Android and smartphones in general. I didn’t tell her about the slew of apps at her disposal, that she can do everything from GPS to scanning a barcode. She only thought that she could use it to call, text, check email, and surf the web.

They say that if you give a man a fish you feed him for a day, but if you teach him how to fish you feed him for a lifetime. Well I also realized if you teach a man to fish, you can also expect him to teach others to fish as well. I sat down and showed my mom the various apps she could download and why they were useful. She loved the MLB app as well as the various card games she could download and play. She even started to use Google Maps to look up how to get from point A to B, and my dad took notice. After awhile, my mom showed my dad all the new things she could do and he started “borrowing” her phone on a daily basis.

There was only one problem: at this point, my mom enjoyed her phone and even used quite a few apps. However the phone was giving her trouble. It was unresponsive in certain apps and would run out of battery quickly. It frustrated her and she ended up seeing the phone as more of a novelty due to the small amount of time she could use it until she had to plug it in or restart it. Even with these frustrations however, it was my dad who was starting to understand why using a phone as more than a phone was actually useful, but he knew he didn’t want a phone like my mom’s. He wanted the best. To my surprise, he went and preordered an EVO and was quite excited about it (not to mention he loved to rub it in my face.)

The day the EVO was released my mom accompanied my dad and I to pick up the phone. When she saw the gigantic screen and realized she could type on it just fine, she swapped out her phone (thanks to the 30 day Sprint return policy) and picked up an EVO of her own.

Since then my parents use their phones for much more than just talking, texting, and email. Just this past weekend they went to Boston and took pictures, used apps to find restaurants, navigated using Google Navigation, and video chatted with me at home using Fring. Thanks to the new hardware, they were no longer plagued and frustrated by their phones, they embraced them and came home from work telling me how all their co-workers coveted their new superphones.

The key to convincing the older generation to be interested and learn about today’s technology is showing them the new forms of their favorite things and trusting them to be excited enough to continue to explore. For my mom, I had to show her that she could get her email and listen to the Yankees no matter where she was. For my dad, it was showing him that there were even apps to track your progress as you exercise or diet as well as apps that helped you determine how far away a hole is when you were playing on a golf course. After I caught their attention with what they liked, they took the initiative and found their own interests on the platform.

Would I recommend Android to my mother? I already have, and she loves it.