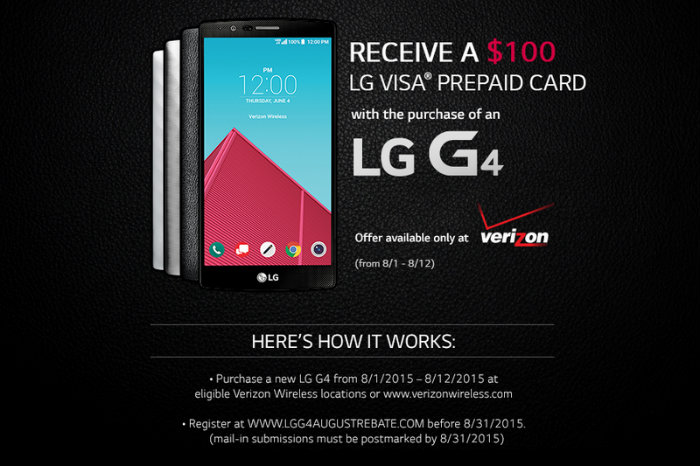 If you’re in the market for a new phone, Verizon is offering a pretty good deal for anyone looking to get the LG G4. If you purchase LG’s newest flagship, the G4, you will get a $100 gift card. There is one caveat to this deal, however. You must purchase the device between now and August 12th, and fill out the necessary form in order to be eligible for this deal.

It does seem that you can either get this device via Verizon’s Edge program, or through the “normal” two-year contract pricing. One more thing to take note of with this deal, is that you must purchase the device through Verizon’s website, or from their brick and mortar locations. Meaning that you will not be eligible for the deal if you go through a third-party retailer.

The G4 has been subject to a lot of various deals since its launch. The latest promotion was through T-Mobile, where they reduced the full-retail cost of the device from $600 down to $480. There were also a couple of deals that were available from LG where consumers received some freebies for picking up the device.

LG G4 owners were able to get a free battery, charging cradle, and leather back directly from LG. This deal was so popular that when the initial promotion ended, LG decided to bring it back to try and drive some more sales. The other promotion was a Buy One Get One Free for their leather back covers for the G4. Both of these promotions have since ended.

Are you in the market for a G4? Let us know in the comments below if you’re looking at picking up the G4 from Big Red. If you already have the G4, be sure to let us know your thoughts on LG’s latest flagship device.