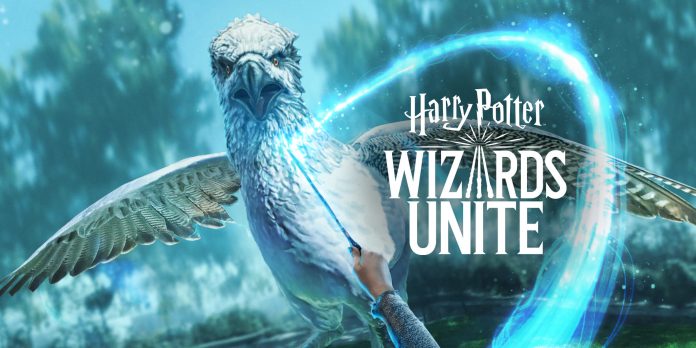 Wands at the ready all of you aspiring witches and wizards out there. Today, we got a first look at the new Harry Potter: Wizards Unite game. This new venture into the wizarding world of Harry Potter comes to us from WB Games and Niantic.

If Niantic sounds familiar, there is a good reason for that. Niantic created the ever popular Augmented Reality game Pokemon Go. Which means, of course, the new Harry Potter: Wizards Unite will have an AR aspect to it. This will be unlike any Harry Potter game you’ve played before.

In the game, you start your journey as a new recruit for the Statute of Secrecy Task Force with the purpose of investigating a Calamity befalling the wizarding world. In order to accomplish this, you’ll have to search the real world for foundables including artefacts, creatures, people, and even memories – trapped by Confoundable magic. Once found they’ll have to be returned to keep hidden from muggle eyes.

Not only will you be collecting items for the Statute of Secrecy Task Force, but you’ll also test your combat skills in fortresses throughout the real world. Inside the fortresses, you’ll uncover dangerous foes such as Death Eaters and soul-sucking Dementors. Some of which will be too powerful for you to defeat alone and requiring you to team up with other witches and wizards. Hence the Wizards Unite portion of the game.

That all probably sounds very similar to the gyms featured in Pokemon Go and that’s not where the similarities end. In Harry Potter: Wizards Unite every spell you cast uses up spell energy. In order to cast more spells, you’ll have to refill your spell energy at inns with food or drink. Reminiscent of the Poke balls we’ve often had to collect from Pokestops to continue building our collection of Pokemon.

As you traverse the world, you’ll also come across ingredients in order to craft potions to aid you in your journey. That’s not all you’ll have to look out for in your travels. Keep your eyes peeled for Portmanteaus that can be used to unlock Portkeys which will transport you to wizarding locations. For example, you’ll be able to visit Ollivander’s Wand Shop in a complete 360 degree AR environment.

While the game isn’t ready quite yet, it will be launching in 2019 on both Android and iOS devices. If you’d like to be one of the first to try out your wizarding skills then be sure to sign up for pre-registration on Android today.

Pokemon Go gets major update with at-home playing in mind