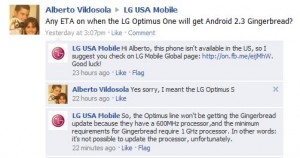 It was rumored as far back as June that Android 2.3/Gingerbread would require specific hardware.  If you recall, Eldar Murtazin was the one who first made reference to the idea that this release would need certain features in order to make the cut.  Features that included a 1GHz processor, 512MB RAM, and more.  Dan Morill, an Android guy on the inside followed a few days later, pouring cold water on the rumors.  Being that he’s someone who knows a few things about Android, we assumed it to be put to bed.  Flash forward to today when the rumor resurfaces.

The word out of LG today is that their new Optimus line of handsets will not support Gingerbread.  According to their Facebook page, the brand new series of phones does not meet the minimum hardware requirements (1GHz process0r) needed.  As some of you know, the Optimus line uses a 600MHz chipset.

Now, it is possible that the Facebook arm of LG might not be completely in the know and are only passing along six-month-old rumors.  However, it’s also possible that they do know what they are talking about and Android fragmentation could take a turn for the worse.  Or would that actually be for the better?

UPDATE: Eldar tweeted that these were not so much requirements, but recommendations. (Thanks, Kyle!)

Either way, we’re waiting to hear more from LG, and Google as to the rumors here.  In the meanwhile, we’ve downgraded the Optimus Line from Very Likely Getting Android 2.3 to May Not Get Android 2.3 on our Gingerbread Tracker.

UPDATE 2: Dan Morrill tweeted yesterday afternoon that Gingerbread does not have requirements.