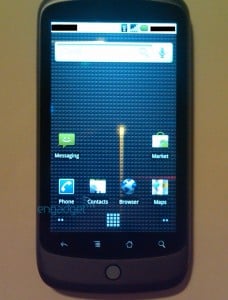 Let’s just this right off the top.Â  If there is anyone in Northeastern Ohio with a Nexus One, email me.Â  I will drive to meet you.Â  I can’t take the jealousy that’s boiling up inside of me.

Jason Chen, an editor for Gizmodo, just gloated to shared with his readers that he was able play with a Nexus One and put it through some paces.Â  Naturally, he wasn’t able to take any pictures.Â  We’ve gone through and pulled out the quotes we think you’ll enjoy the most.

Chen does speak more in-depth about the internet experience, noting that it bests the iPhone and Droid in almost all tests.Â  As we’ve heard whispered, the animated backgrounds are interactive and couldÂ  make for some fun, interactive apps.Â  The camera and speakers are good, not great, with both about what most smart phones are offering.Â Â  As mentioned by others, the browser does not have multitouch.