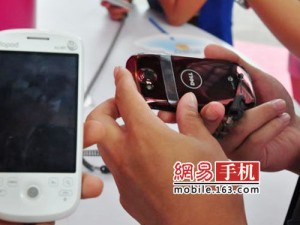 The Wall Street Journal is reporting that Dell is entering the US wireless handset market with help from AT&T.Â  Expected as early as next year, the phone could be among the first on Ma Bell’s network.Â  This would be Dell’s first foray into the US market, but not their first overall.Â  The OPhone (Mini 3i) was announced for China Mobile back in August.

From the sound of things, Dell still has some work to do if they expect the phone to succeed here in the states.Â According to a CrunchGear tipster, the phone felt â€œcheap and plasticky, like the Pre” although he believes there’s still some cosmetic surgery ahead.Â  The camera gets a boost from 3-megapixel to presumably something in the vicinity of 5-megapixels.

The worst part in all of this is a rumor that Dell has splintered the Android stack and plans releasing itÂ  with modified and/or missing libraries.Â  Not only does this make things more difficult for developers, but some apps simply wonâ€™t work.Â  Not exactly the kind of thing Android users wanna hear.