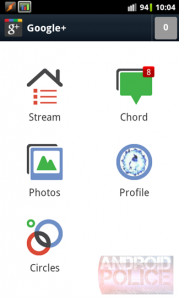 Android Police are on a roll tonight! Hot on the heels of the Google Music 4.0.1 apk we have the Google+ 2.0 apk, again built specifically as one of the core apps that should be in Ice Cream Sandwich. I managed to have a little play with this one, because it’s not a system app so you can just uninstall the old one from the Market before installing the new one. The main difference is a UI change, along with minor optimisation for tablets. The tablet optimisation being there is now a menu key in the top bar rather than the notification bar and two widgets, there’s nothing in the way of making use of the extra screen real estate. One such widget is a resizable, scrollable, news feed configured to show whichever circle you wish and the other is a stacked photos widget that you can flick through much like how you do with the books widget.

Although the app doesn’t appear to be final, as the Messenger app is now back to being called Huddle, rather than Chord as the screenshots Android Police have show. Also the photo sharing has gone from the Messenger part as well as the widget on phones. To download the apk and to see side by side comparisons of the app, check out the article by Android Police in the source link.

What do you guys think? A welcome improvement? Or do they need to improve some more before ICS is released? Let us know below.