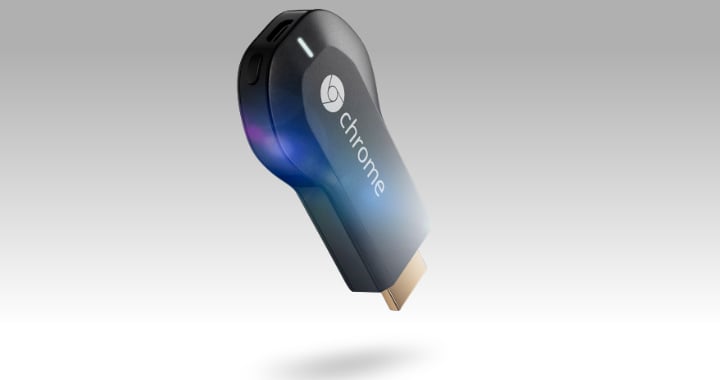 Put on your suit and tie, folks, and get ready to meet Chromecast. Google just announced the new device, and what it does is simple, yet so very important to how we watch media. So, what is ChromeCast?

Simply put, Chromecast is a tiny dongle that plugs into your HDTV to stream your media from any Chrome-connected device. It’s reminiscent of a Roku Streaming Stick, but handles things a bit more like and AirPlay Streaming device. Some have said it’s a perfect marriage of the Nexus Q and the Google TV, but Google is touting this as simply a practically setup-free, easy-to-use experience. Just pop it into your TV, setup on your WiFi, and you’re streaming like a pro in no time.

Chromecast will grab media from your computer, your tablet, and even your phone, and stream it straight to your HDTV. One of the genius parts about this is the fact that it runs through Chrome, and not the Operating System itself. Why is this so important? Because Chrome runs on so very many platforms. Mac, Windows, Linux, Android, you name it, and Chrome is on it. This makes cross-platform integration a huge part of this device.

Usage looks simple enough, as Google has added a “Cast” button to the YouTube interface, and it will simply beam right over to any Chromecast device in your network. However, this little wonder does much more than just YouTube – we saw demonstrations with NetFlix, Google Play Movies, Music, and TV – not to mention, a full version of any Chrome tab. That’s right: Chrome will be getting its very own “Cast” button, so you can spew any Chrome tab straight onto your HDTV, and they even say Pandora support is coming soon.

To sweeten the deal even more, Google announced that there will be an SDK, so that developers can make just about any app usable with Chromecast.

You can pick up a Chromecst dongle for $35 right now at Google Play.