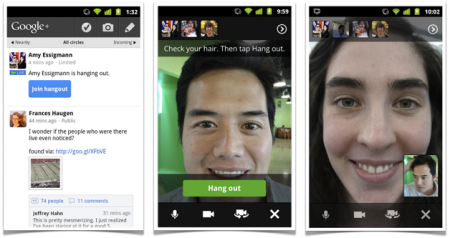 Google have just taken to their blog to announce some new features for their social networking site Google+. The majority of these new features are aimed at the mobile apps for the site, the biggest being mobile Hangouts for Android handsets running 2.3+ with a front facing camera. I’ve yet to try out this new feature but I hope the majority of you agree it’s a welcome addition.

One thing that annoyed me a little is that you can now +1 comments in the stream but only on iOS devices, what sort of treachery is this Google?! Although Android support is coming soon and the iOS app doesn’t yet have mobile hangouts so I’d say we’re still winning overall on the features front.

What do you guys think of the new features? What else would you like to see in future app updates? Let us know in the comments below.

UPDATE: I forgot to include that with Google+ moving from field trial to Beta, they have moved from invitation only to open sign up. I’m guessing if you’re reading this you’ve probably already signed up to Google+ but if not then what are you waiting for?!