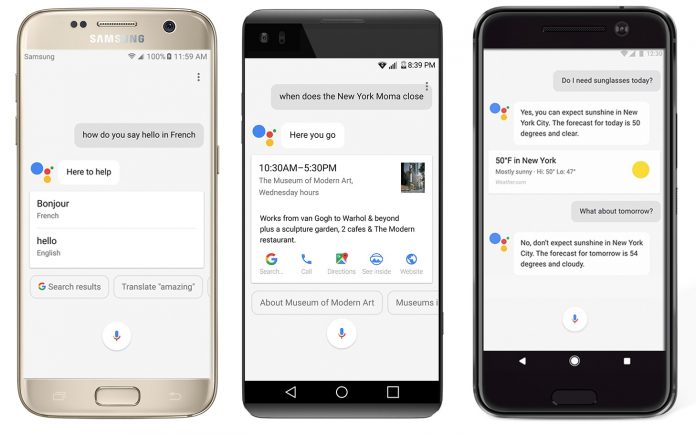 Not long ago the Google Assistant was an exclusive to the Pixel and Pixel XL phones. But Google wants to extend the availability of the virtual assistants to all phones running Android 7.0 Nougat or Android 6.0 Marshmallow.

Well this week Google has started rolling out the new feature to more Android phones, so you better go ahead and check your phones to see if the feature has showed up for you yet. Google has also launched a new video to signal that the rollout has begun.

However, we’re not told which devices are getting the new features, so we ask our readers to check their phones and let us know in the comments whether or not they are seeing the Google Assistant.

Google says that for the new feature to work, users will need to have Play Services updated as well as at least 1.5GB or memory and a 720p screen. Also note that the Pixel animation won’t be available for other devices.

The new feature will be made available for users of the English speaking world first – starting with the US, Australia, Canada and the UK. Then German speakers will be treated to the Google Assistant.

At MWC 2017, Google showcased an image showing the Google Assistant on the Galaxy S7, LG V20 and HTC 10 – so we suspect these will be the first beneficiaries of the Google virtual assistant.

Don’t forget that the rollout won’t be limited to premium devices like the ones we mentioned above. The Google Assistant will land on affordable handsets like the Nokia 6, Nokia 5, Nokia 3 and Motorola Moto G5 and Moto G5 Plus.