Google on Tuesday introduced its next version of Android. Well, sort of. As it has done with the last few iterations of its platform, Google is giving developers early access to the upcoming release. Indeed, the first developer preview has been made available for select devices.

The first question we always ask when dealing with a new version of Android is, “what’s new or improved?” From the sounds of it, there’s definitely enough to merit a full release candidate. Will you notice the differences? It certainly sounds like we could. 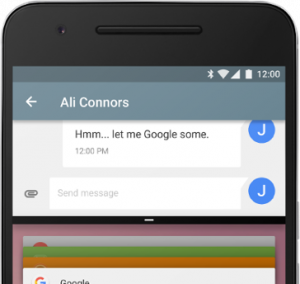 Building on the stuff that was implemented in Android 7.0 Nougat, Android O will place an emphasis on improved battery life and performance. To do so, Google is placing additional automatic limits on what apps can do in the background, across three key areas: implicit broadcasts, background services, and location updates. In other words, it will be easier than ever to design apps that have minimal impact on battery.

This new feature give users detailed control over different kinds of notifications — users can block or change the behavior of each channel individually, as opposed to a blanket change to an app’s overall notifications. Moreover, Android O offers up new visuals and grouping in notifications.

Phones and tablets pick up the ability to watch a video while answering a chat or banging out an email. Additionally, there’s a overlay window feature that can be used in place of system alert windows; multi-display support lets you launch an activity on a remote display.

You know how convenient it is for filling in fields and forms in Chrome once you have auto-fill in place? Android O brings to the platform level with an API that allows for saved and secure automatic data such as addresses, user names, and passwords.

One thing we really enjoy about custom launchers is the uniform approach to icons. Android O features adaptive icons which can change shape based on the device. No more circles, squares, and random shapes for icons; this will be a much cleaner look

There’s plenty of other stuff under the hood for Android O, even in the first developer preview. Other touches include Font resources in XML, new Java Language APIs, enhanced connectivity, improved keyboard navigation, and wider audio codec support. You can read more about each of them at the Android Developer’s Blog.

Don’t be in too much of a hurry to rush out and install this on your device. Well, you can, but you should know that this is in very early stages. According to Google, there’s “still plenty of stabilization and performance work ahead of us.. but it’s booting”.

While it’s available to flash on select models, it’s positioned at developers only. In other words, it’s not intended for daily consumer use. Proceed with caution.

If you absolutely want to install the first developer preview of Android O, you can do so on a number of devices. Among those eligible are the Nexus 5X, Nexus 6P, Nexus Player, Pixel C, Pixel, and Pixel XL.