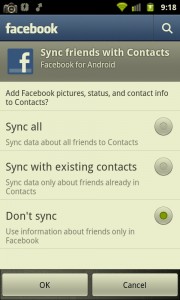 Why? It’s part of Google’s ongoing spat with Facebook over how users’ contact data is handled. Last fall, Google blocked Facebook from importing Google contacts at a user’s request, arguing that if Facebook wanted to pull in contacts from Google, they should provide a way for users to get their Facebook contacts out. Now, they’re extending it to Android.

So going forward, you’ll be able to get at Facebook contact info only through the Facebook app. It’s for your own good, I’m sure you agree.

For now, this only applies to the Nexus S, but it will also apply to “future lead devices,” which I’m guessing means, at minimum, the Motorola XOOM.

Google’s full statement on the matter:

“We believe it is very important that users are able to control their data. So in the over-the-air update for Nexus S, we have a small change to how Facebook contacts appear on the device. For Nexus S users who downloaded the Facebook app from Android Market, Facebook contacts will no longer appear to be integrated with the Android Contacts app. Since Facebook contacts cannot be exported from the device, the appearance of integration created a false sense of data portability. Facebook contact data will continue to appear within the Facebook app. Like all developers on Android, Facebook is free to use the Android contacts API to truly integrate contacts on the device, which would allow users to have more control over their data. We are removing the special-case handling of Facebook contacts on Nexus S and future lead devices. We continue to believe that reciprocity (the expectation that if information can be imported into a service it should be able to be exported) is an important step toward creating a world of true data liberation — and encourage other websites and app developers to allow users to export their contacts as well.

“There will be no change in the way Facebook contacts appear on the Nexus One. Since the Facebook app was preloaded on Nexus One, it created an expectation for users of how the device would function.”