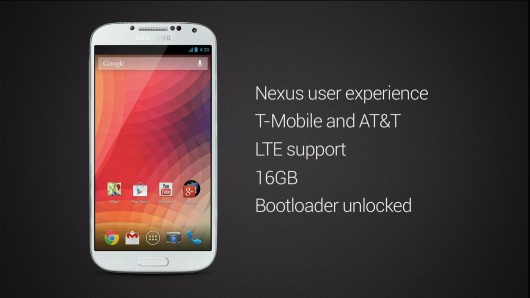 Last night, we posted about the fact that we should be seeing a stock Android version of the Galaxy S4 from Samsung. Now, Google has officially made the announcement that, yes, this is true. It’s been dubbed the “Google Edition” of the GS4, and is going to go on sale via Google Play.

The Google Edition will run Android 4.2.2 stock, which means no TouchWiz UI overlay. Just pure, simple, Vanilla AOSP Android. It will go on sale June 26th via Google Play, and will run on AT&T and T-Mobile‘s US bands. Also on board will be MicroSD expansion, LTE, 16G onboard storage, an unlockable bootloader (yay!), and software updates on the double. To make things extra sweet? Google promises users the total “Nexus user experience”. The device will sell for $649.