Google, along with a number of carriers and the GSMA, want to change how texting works – at least on Android. Apple has long since evolved texting on iOS, with the introduction of iMessage in 2011. The new system, called Rich Communications Services (RCS) will give mobile operators around the globe an “open, consistent, and globally interoperable messaging service across Android devices.”

The History of SMS

Short Messaging Service or SMS has actually been around for over 20 years. The first SMS text was sent by Neil Papworth, a young communications engineer in the United Kingdom. It was sent via computer, as phones with keyboards weren’t around back in 1992. But I’m getting ahead of myself.

The idea of SMS was first formed in 1984. In his home in Bonn, Germany, Friedhelm Hillebrand sat at his typewriter tapping out random sentences and questions. He was testing the idea of sending short messages to people and figuring out a good signal-to-noise ratio for messaging – meaning how short a message could be before it became indecipherable. As he typed, he counted the number of letters, numbers, punctuation marks and spaces on each page before arriving at a magic number: 160. Hardly larger than a modern tweet, the standard SMS message was limited to 160 characters per text. 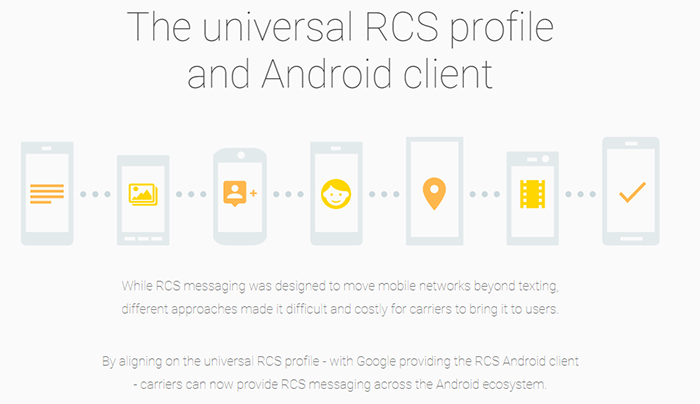 Fast forward to September 2015, when Google acquired Jibe Mobile and first announced it would adopt the RCS standard.

“SMS carrier messaging is used by billions of people every day and enables people to reach anyone around the world, regardless of their device, carrier, app or location. The features available in SMS haven’t kept up with modern messaging apps. Rich Communications Services (RCS) is a new standard for carrier messaging and brings many of the features that people now expect from mobile messaging, such as group chats, high res photos and more,” said Google at the time of buying Jibe.

RCS is meant to combat the rise of Over-The-Top (OTT) messaging services, like WhatsApp and Facebook Messenger. Customers are increasingly being drawn into these third-party services and away from Google’s own messaging apps.

The biggest advantage RCS has over OTT will be the universal implementation across various networks and devices that RCS will have, instead of jumping in and out of OTT apps.

In light of the recent Apple vs. FBI controversy, many consumers have started to question the security and privacy of their personal devices. That being said, several security experts have objections to the security of RCS. As reported by Re/Code, Philip Leiberman, CEO of Lieberman Software says “It’s pretty primitive…you try to connect one carrier to another carrier, you end up degrading to the worst encryption of the pair.”

It’s important to note that Google is not responsible for the RCS security system; this is wholly in the hands of the carriers. “It’s designed, according to experts, to default to the least fortified carrier security system, since many operators are tightly regulated (or in some cases run by) national governments.” As the battle over encryption heats up, the weak security of RCS may prove to be a factor when consumers choose iOS vs. Android.

WhatsApp’s Snapchat-like Status feature is now available for all