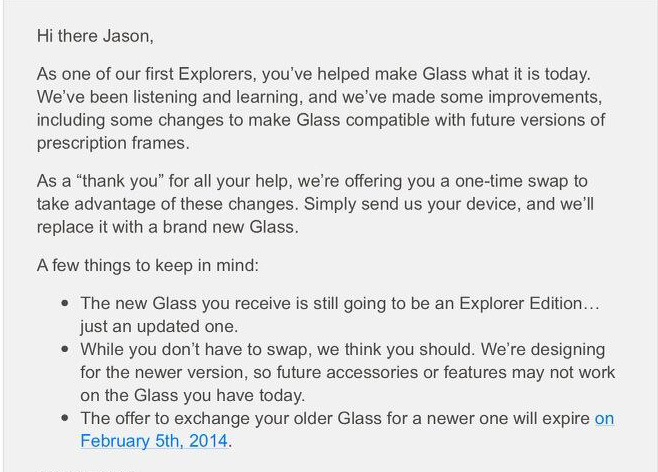 When Google revealed it had a new version of Glass, refined by months of feedback and use by Explorers, it also announced the first set of Explorers would have the option to swap the original Glass for v2. There was no exact timing announced with the update, only “before the end of the year.” Last night I received an email from Google giving me the option to swap my first generation Glass for the latest iteration.

During the swap process I was asked to verify my shipping address and was given the option to change Glass colors; the only change Explorers will get to change colors.

The new version is tweaked to allow for prescription lenses and frames for those who require it, as well as other internal tweaks Google isn’t yet revealing.

The swap email states the process will be carried out on a first come, first serve basis, giving current Explorers until February 5 to initiate the swap. Explorers are able to skip the swap, retaining the original Glass, but Google warns future accessories and enhancements may not be compatible with the older hardware.