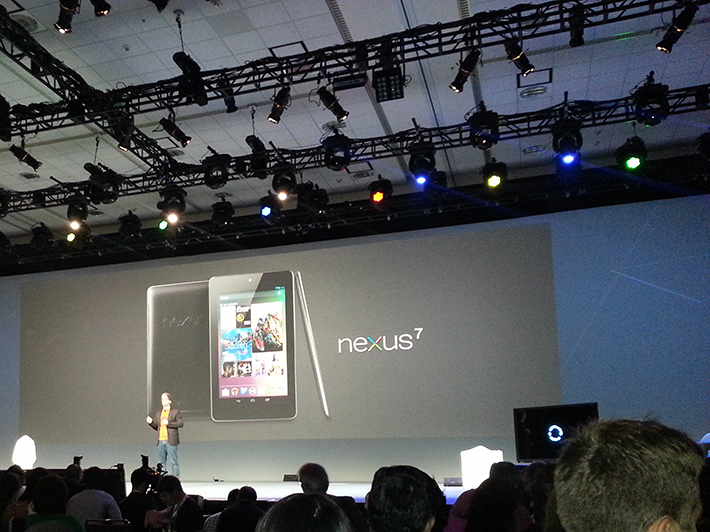 Well, the worst kept secret in Android has come to pass – the Nexus 7 is a real tablet, and its available for $199.  The first day of keynote is in the books, the nerds are lining up for their freebies and the Android universe has a new OS to look forward to getting.

As you’ve probably already heard, Android 4.1 Jelly Bean was announced today and is coming preloaded on the Nexus 7 tablet.  Expected to hit other devices such as the Galaxy Nexus and Xoom in mid-July, 4.1 is not just minor tweaks on top of Ice Cream Sandwich.  Features include enhanced notifications and options, offline capabilities for voice to text, resize and adapt for widgets, and Google Now. 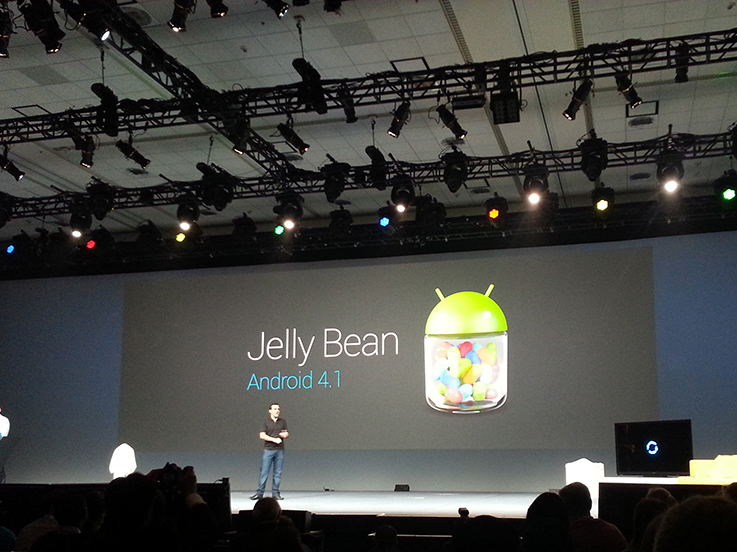 The feeling I gathered from the developers sitting nearby was that these were all welcome additions, even though some are coming later than they should have.  When demonstrated on the handset, it was pretty neat, however, when demo’d on the 7-inch tablet, it was more immersive and engaging.  The biggest props came for offline voice to text and the cards that come with Google Now and search results, although there were oohs and ahhs when we saw how notifications work for 4.1. It was also nice to see Google putting more attention to little details like bouncy animations and buttery smooth transitions.

It’s pretty obvious that Google is really pushing the tablet agenda here, even more so than in 2011’s Google I/O.  Content is the key and Google has become a proprietor of everything – movies, games, books, magazines, and apps.  When you have a device that is priced to compete with the Kindle Fire then you will need to be able to support it with content. The moves on Google Play signal that Google is ready to deliver on this front and that there’s a compelling reason to buy an “Android” tablet.  Speaking of the tablet, the Asus device is much more bang for your buck than a Kindle Fire.  For your money you get a higher resolution screen, a front-facing camera, NFC, Bluetooth, and stock Android apps and experience.  It will take some marketing and ad spending but Google has the potential to sway people from going with Amazon for their next (or first) tablet. 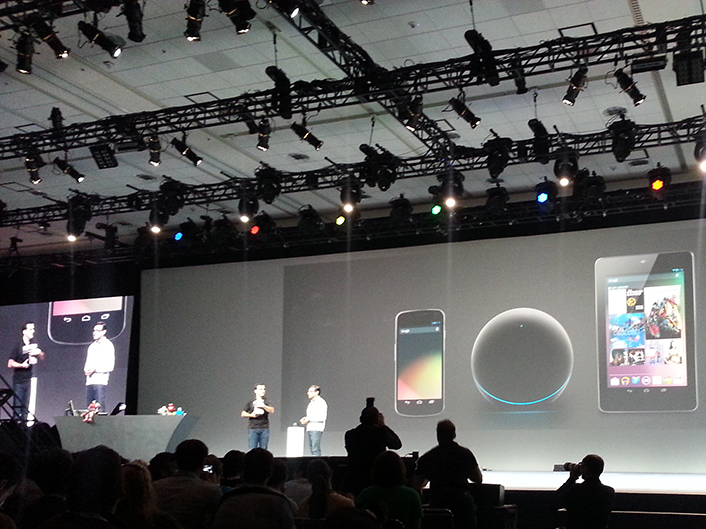 Although I am anxious to get my hands on the tablet, I am really more curious about the Nexus Q.  Being able to share my music or movies from the cloud is interesting and Google’s approach is very obvious – Come to us for everything and we’ll let you watch it everywhere.  As much as I like the novelty of letting everyone add music to the party playlist, it feels like this would make for a fun way to broadcast movies and YouTube.  I still haven’t uploaded my entire library of music to Google Play so perhaps this is the way to get me to move my music to the cloud.

The Google+ tablet experience looks very sharp however I am still a little bummed that there’s not an easy way to handle pages. Many of you might know that we have a Google+ page but it’s not something we give a great deal of attention to, on a regular basis.  We’ve struggled with handling this as we are forced to deal with the browser so let’s hope there’s help on the Pages front soon.  In the meanwhile, we are able to use third party apps and services to keep you plugged in and engaged with our Facebook and Twitter accounts.  That said, I will likely get more active with Google+ now that it’s optimized for tablets.  Even if it’s on a personal front, it’s more immersive and inviting than ever before.

Along those lines, Google + Events is one of those ideas that makes so much sense once you see how it’s designed.  Tied into your Google calendar and with your circles, it’s silly to imagine any other way of coordinating an event.  And, because of the way it handles your event from before it starts to after it finishes, it’s something that will bring people coming back for more.  What I like most about this Google+ feature is that it does not require you to sign up, nor does it beat you over the head with trying to convince you to get started.  If you wanna stand on the sidelines, so be it.  But, for those who really want to stay engaged and have fun, Google + Events is a huge leap in that direction.  With 250 million users (150 million 30-day active), we could be on the verge of a major growth explosion.

There’s nothing quite like a live Hangout with Google Glass that includes skydiving, biking, building scaling, and a surprise visit from the CEO. To say there was a buzz in the air is an understatement. I’ve always looked at Glass as somewhat of a novelty idea for the time being and figured the long term stuff would be great. Knowing that it could be years before final realization, it’s something I’d watch from the side. After seeing it in real world applications, I am very optimistic in that it could change how people share and what it is they capture. Holding a baby in your hands and it smiling at your eyes instead of being put off by a camera? Come on! Biking and running with real world help and location-based assistance? I get it now.

There’s still another keynote ahead for tomorrow and plenty of time to spend with developers and other Googlers. Looking ahead to Chrome and whatever else it is that Google has, I am stoked. It could be the fanboy and rose-tinted glasses talking, but I see as much promise today as I did when Android was announced. Sure, the developers are eating this stuff up, but when it’s all said and done, consumers are going to love the end results.