My oh my has this been a busy Goog 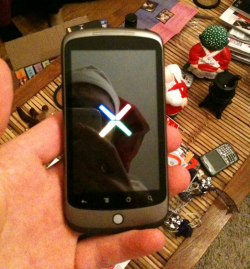 le Phone weekend! Google, if reports are to be believed, is rumored to launch the GSM unlocked phone known as the “Nexus One” with the help of a familiar friend-T-Mobile USA.Â  According to Peter Kafka of All Things Digital, Google intends to sell the phone in a way that customers who buy the handset are provided a list that lets them pick a carrier in a menu-style set up.Â  Kafka reports that Google has approached multiple carriers about supporting its new phone, but only T-Mobile has agreed to actively help push the device.

I should also note that it has been rumored that the only reason Google decided to manufacture the “Nexus One” as a GSM device in the first place is becauseÂ  Verizon Wireless declined to help Google push the phone on the open market.Â  Did Verizon feel betrayed? Did T-Mobile pull of the heist of the century?Â  Only time will tell.