Many have long suspected that Google+ was in its final days, but almost no-one could have predicted it would end like this.

According to the Wall Street Journal, Alphabet Inc. announced that it would cease operations for consumers after it was revealed that the social network revealed personal information for hundreds of thousands of users. The information was available to third-party developers between 2015 and March 2018.

As part of its response to the incident, the Alphabet Inc. unit plans to announce a sweeping set of data privacy measures that include permanently shutting down all consumer functionality of Google+, the people said. The move effectively puts the final nail in the coffin of a product that was launched in 2011 to challenge Facebook Inc. and is widely seen as one of Google’s biggest failures.

The Journal also reports that Alphabet chose not to disclose the issue this past spring, when the issue was first discovered, “in part because of fears that doing so would draw regulatory scrutiny and cause reputational damage…”

What action can I take?

This story is early in its reporting and we don’t have all the facts yet. As of the time of this writing, it is impossible to know who had what information leaked. We do know the affected accounts had their full name, email addresses, birth date, gender, profile photos, places lived, occupation, and relationship status exposed.

If there is a silver lining, phone numbers, email messages, timeline photos, direct messages, or any other type of communication data were not exposed, according to the Wall Street Journal.

Despite the social network closing down, you can still take action. If you’d like to delete your account, head to this link and follow the instructions. If you’re given the option to upgrade instead of downgrade, you do not have a Google+ page associated with the account.

If you do, and are ready to delete your account, there are a few things you should know first. 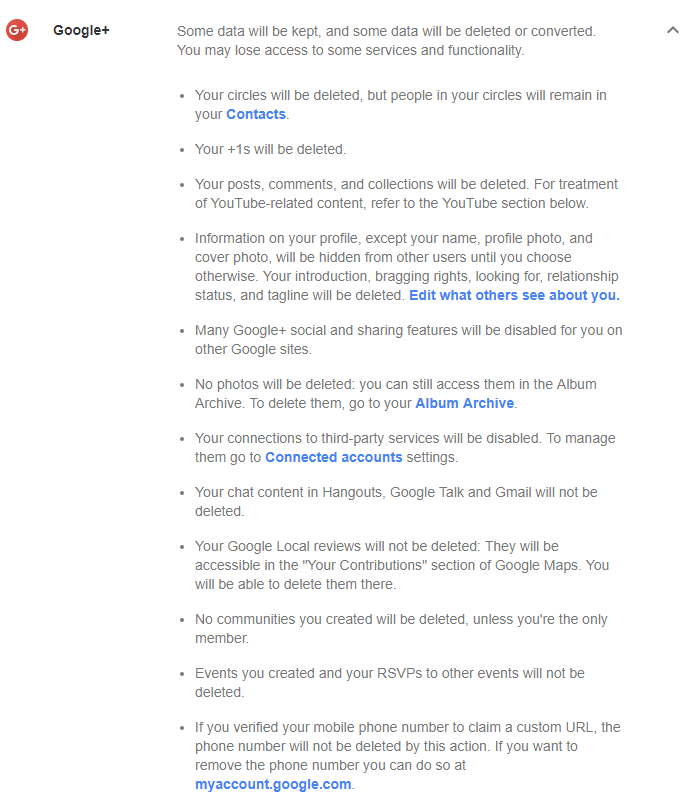