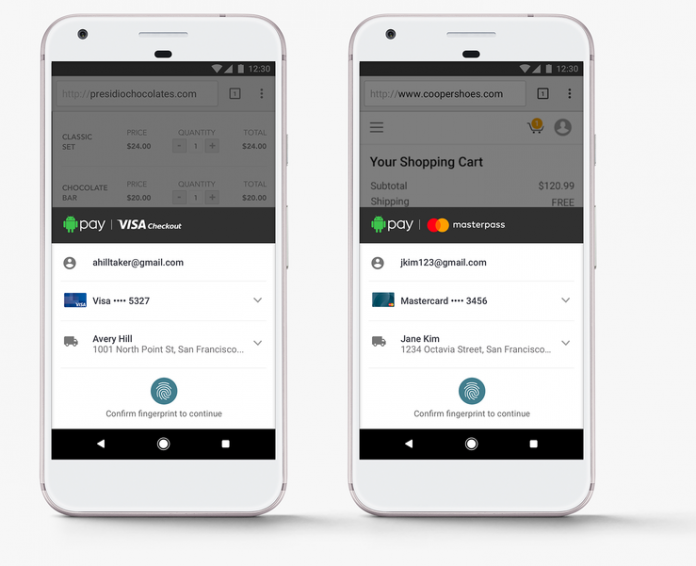 Google is looking to make Android Pay easier to use for mobile website transactions, so this week the search giant has announced it has partnered up with Visa and Mastercard in order to offer more options. The new alliance will permit Android Pay users to pay on websites that allow payments to be made via Visa Checkout and Masterpass.

Starting early 2017, mobile users will be able to purchase from a variety of websites without having to enter a username or password. Instead they will merely rely on the device’s authentication methods like fingerprint scanning. To get started, customers will have to link their accounts to the respective services in the Android Pay app.

Google is trying to make things easier for merchants as well. Those who already have Visa Checkout and Masterpass on their website won’t have to do anything extra, as the buttons will update itself automatically. Due to ease-of-use, it is expected customers will be less prone to abandon shopping carts which translates into higher conversions on the vendor’s websites.

The competition is following pretty closely, with Apple Pay also promising a similar feature for its users. PayPal has also been known to be working on a solution which will allow users to bypass entering a username and password.

Furthermore, PayPal has been courting Visa and MasterCard in an attempt to increase its brick-and-mortar presence. Earlier this year PayPal struck a deal with the two in order to allow customers to pay with their smartphones in-store.

Google launched Android Pay in 2015 and since then the search giant has been working to expand its reach as much as possible. At the moment, the service is available from about 200 banks and credit unions in the United States.

Google is also interested in launching Android Pay in other countries. For example, the service has recently landed in Hong Kong.