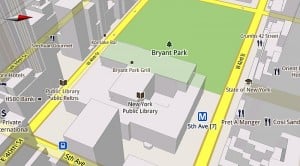 Keep a close eye on your Android handset over the next few days.  Google has a new version of their Maps application lined up, ready to roll out the door.  Andy Rubin demonstrated the latest release of the popular map tool at tonight’s D: Dive Into Mobile conference. The next version will rely more on the device than previous iterations and using caching for lost connections and offline usage.

According to Rubin, the maps will use vectors and less data than before and will offer 3D data for roughly 100 cities around the world. Unfortunately, not all Android phones will be support Maps 5.0’s features 100-percent across the board. Engadget was sent a list of devices which are said to make the cut. A quick glance reveals the list is comprised of most upper echelon phones released over the last year, starting with the original Droid.

Gizmodo is reporting that Maps 5.0 will work for any phone running Donut (Android 1.6) and above.  This would match up with the last few releases of Maps.  We’re not exactly sure what will not work for handsets like the popular myTouch and Optimus lines of phones but we suspect we’ll find out soon enough!

Oh, for those of you Nexus One owners wondering why your beloved phone is not on the list, it’s because it lacks certain multitouch requirements.  Ouch.