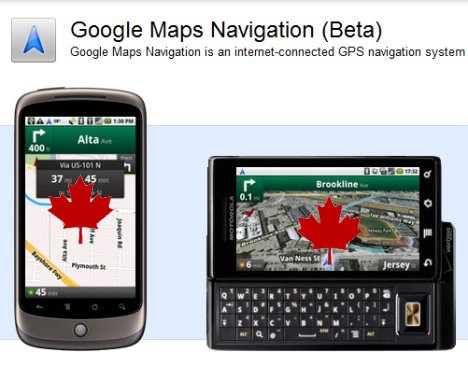 Oh ya, it’s true. If “YOU ARE CANADIAN!”, then you now have access to Google Maps Navigation. Google Maps Navigation is a free turn-by-turn navigation service which was released with the Motorola Droid last year in October and has since become available to all devices running Android 1.6 and above. That’s right, you knew it was too good to be true. Most devices in Canada are still running Android 1.5 such as the HTC Dream, HTC Magic, LG Eve, and even the lately released Motorola Quench and DEXT. If you happen to be lucky enough and own a Motorola Milestone, Sony Ericsson Xperia X10, Acer Liquid E, HTC Legend, or maybe even a Nexus One you can now access it through Google Maps where it was until recently inaccessible. Be sure you have the latest version of Google Maps from the market (V4.2.0).

To use Google Maps Navigation:

2) Enter a start and end point with “Car” as the mode of transportation.

3) When the directions appear click “Navigate” from the options.