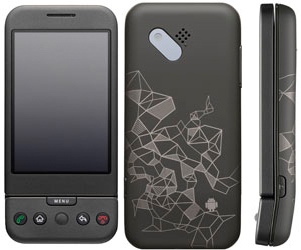 Attention aspiring Android developers based in countries like the United States, UK, Germany, Japan, India, Canada, France, Taiwan, and around ten others.Â  You can now get a completely unlocked G1 handset from Google.Â  This means that neither the SIM card nor the hardware is locked down with any restrictions.

For those of you AT&T folk wanting to get your hands on a G1, this is your ticket.Â  All you have to do is pretend that you want to develop an app for Android.Â  There’s just a $25 registration fee on top of that $399 no-contract price T-Mobile offers their customers.Â  Not bad huh?

Just be careful with your new unlocked G1.Â  Because you’ll be able to do essentially anything you want to it, the potential certainly exists for bricking it.

Personally, we’re jealous of that sweet looking case.Â  We want to ditch the T-Mobile logo on the front and pick up the Android guy and a cool drawing on the battery cover too!

Thanks to Nick from HTC Source for the heads up this morning.

Verizon often offers deals and savings on its products and services, giving customers a chance to keep money in...
Read more
News and Rumors

Tronsmart made a bang with 3 different models of the Bang party speaker. The company has come back to...
Read more
News and Rumors

Nobody wins when you shop for Valentine’s Day at the last minute. You end up paying more or making...
Read more