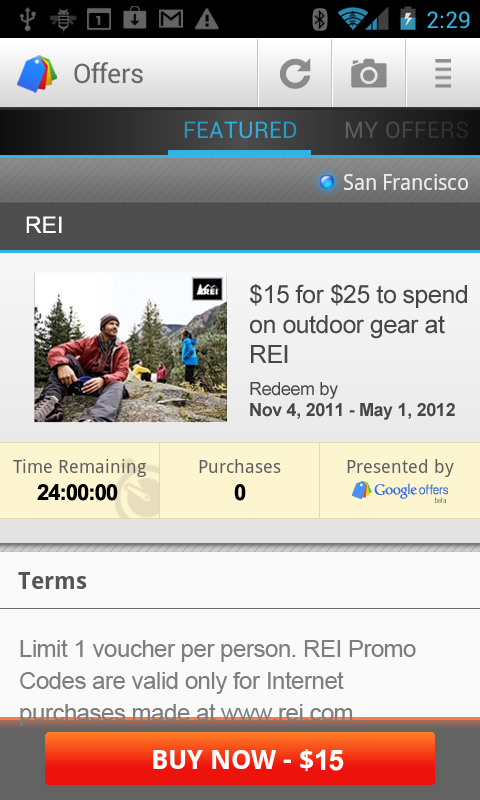 If you are a person who loves saving money and doesn’t like to miss good deals, then there’s an app for that, and a good one. I’m sure you people are familiar with Google Offers, which is Google’s very own service similar to Groupon, which is one of the leaders in online saving deals and coupons. Google officially launched their Google Offers application for Android, which will help people to find local deals. There will be a new featured deal everyday which you can easily access while on the go, and all your previous purchases are saved. Google is working on adding more cities in the ‘Google Offer’ list, so if your city isn’t available don’t worry, it should be added soon.

If you’re already a Groupon users, it won’t hurt to try Google Offer as having more than one app to find the best deals is a win-win situation. Google actually tried buying Groupon a long time ago for $6 billion, but they rejected the offer. So it’s kind of Google’s policy, if they try buying something from someone, and they refuse, then Google makes its very own to challenge it. You might remember when Google tried buying Facebook, but Facebook declined, and now we have Google+, which is considered the toughest challenger to Facebook. Anyway folks, download the application and share your thoughts about the new app in the comment box below.