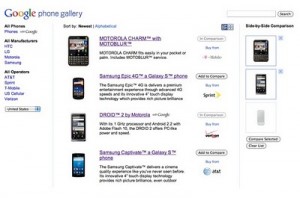 Google.com/phone, formerly Google’s storefront for the Nexus One, has been relaunched as the Google Phone Gallery, letting users compare Android phones available in 14 countries from a variety of manufacturer and carriers.

Note that it is not a comprehensive list of Android devices. Rather, it seems to be a selection of phones that Google has decided to highlight.

While the stated intent of the gallery is to be a tool to help consumers compare and make decisions, Google is using the strength of its imprimatur to endorse certain phones and not others. That certain phones are not included in the gallery is a way of expressing disapproval with, for example, Verizon’s Fascinate (which leaves off Google Search for Bing) without being directly punitive.

Also of interest is that the “with Google” logo is prominently displayed by some of the devices in the Gallery, and that the list can be filtered to only show phones “with Google.” The site explains that “‘with Google’ phones have been optimized for use of Google mobile services, providing easy access to Search, Voice Search, Google Talk, Google Maps, Gmail, Sync, YouTube and Android Market (where available).”

This is the clearest (only?) explanation of what “with Google” means that I recall, but matters become confusing again when you consider a couple of issues:

It will be interesting to see how the Gallery evolves. I’m glad to see Google begin to give a quasi-certification to phones that meet certain standards, but hope that the question of what “with Google” means will be made more clear.