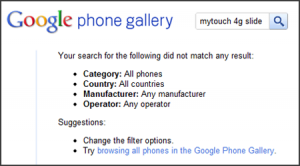 It has been nearly a year since Google overhauled their website for the Nexus One, turning it into a gallery of Android handsets.  Re-launched back in September of 2010, google.com/phone was supposed to be a place where one could check out all the latest Android devices, across various carriers, countries, and handset makers.

While we would have liked to see any and all smart phones and tablets getting the official stamp of approval, we found that some models were left off the list.  The Samsung Fascinate, for instance, was most likely left off the list due to its deep Bing integration.

I just checked the Google Phone Gallery for a number of recent releases and came away disappointed.  I could not locate the Droid Incredible 2, Evo 3D, myTouch 4G Slide, or HTC Status.  For those not keeping score at home, this represents one from each of the big four carriers in the United States.  I can only assume the same might be said for other providers around the world. Others I noticed missing include the LG Revolution, Droid X2, Droid 3, and Photon 4G.

What I find interesting is the inconsistency.  Take for instance the the Sony Ericsson Xperia PLAY which launched in late May.  Yep, it’s there.  The LG Revolution was released on the same day, yet there’s no trace.  Tablets are treated in almost the same manner, listing the Galaxy Tab 10.1 (Wi-Fi) and Motorola XOOM but skipping over the LG G-Slate.

What would you do with the Google Phone Gallery?

Would you fill in the blanks and get this back up to par or would you scrap it altogether?  Hit the comments below to tell us how you would fix it!