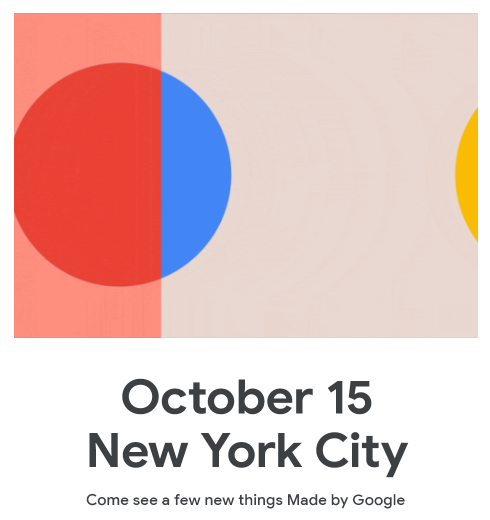 Google on Monday began sending out invitations to a hardware event for October 15 which takes place in New York City. It’s here where we expect to see the formal introduction of the Pixel 4 and Pixel 4 XL.

Google’s 2018 event saw the debut of the Pixel 3, Pixel 3XL, Pixel Slate, a Google Nest Hub, and the revised Chromecast. It’s these annual October gatherings where Google shows off the new hardware that takes advantage of the software features introduced and/or shown off at Google I/O.

Pixel 4 confirmed to have gestures and face unlock

Google took an unusual approach for 2019, confirming the existence of the Pixel 4 all the way back in June. The last few months have been a steady trickle of leaks and rumors around the flagship phone experience.

Among the cooler features anticipated in the Pixel 4 are a take on Face ID, hand gestures, and some really interesting camera modes and sensors.

In addition to the phones, Google is reported to have a Pixelbook 2 and new Google Home speakers up its sleeve. The invitation refers to a “few new things” so we’re anxious to see them unwrapped.