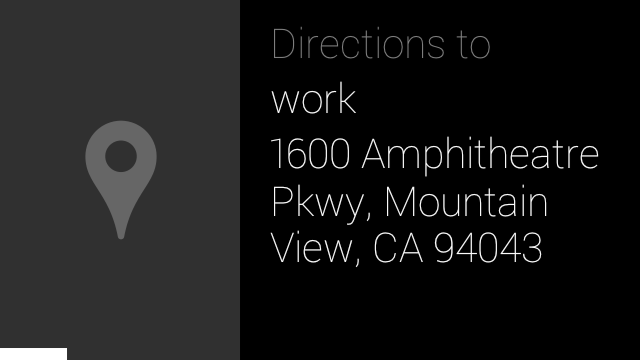 True to its word Google has released its November update for Google Glass owners. The XE11 update adds some new features sure to make most Glass Explorers happy.

Included in the refresh is the ability to tell Glass to get directions to “home” or “work”. In the past this wasn’t possible, requiring you to either say the address or business name for navigation. Tying into the Glass owners Google Now settings users of both iOS and Android can now set their preferred locations via the Google Search app.

The most intriguing new feature (and the one I was the most excited about) is the ability to ask Google for your agenda. The feature ties into your Google Calendar and will display your agenda on demand. But as with any feature I often look forward to, there’s a catch. Google Apps users are not yet able to take advantage of this. This feature is part of Google Now’s private search, and thus not available to Google Apps users.

Some of the remaining features added today include a reworked setup process for new Glass owners, and the addition of a shortcut to begin screencasting directly from the notification shade on Android devices.

Sadly Google also removed one of my most used features: the ability to quickly launch a search by long pressing on the touchpad at any given time.

With Google hosting an event on November 19 to demonstrate the Glass Development Kit to developers, here’s hoping there’s a little bit more to be discovered in XE11.