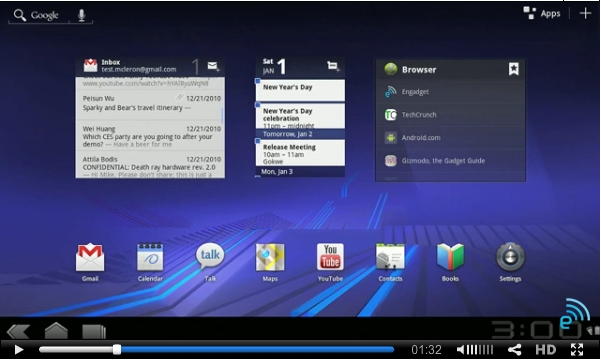 Well, the video’s been made private on YouTube, but that didn’t stop Engadget from snapping it up for our viewing pleasure. On the androiddevelopers YouTube channel, Google (accidentally?) posted a full-fledged, all-out, crazy-insane video showing off it’s next version of Android–Honeycomb. Not only will Honeycomb be version 3.0, but it will also be exclusively for tablets. This likely means that Android development has been branched off into two projects–phone and tablet. This doesn’t necessarily mean that there won’t be a “Honeycomb” for phones. It just means that it won’t look anything like the tablet version (2.4 anybody?).

In the video below, you’ll see an entirely new UI, coated in an eerily cool black theme, and sporting a completely new way of navigating and using homescreens. It’s spot on with what Andy Rubin showed off a few weeks ago and even includes built-in Google Talk video chat. After seeing the video, it becomes very clear why tablet makers are so excited about the latest iteration of Android. Instead of evolutionary, Google is pushing for something revolutionary.

Check out the video below. Oh, and just in case it gets pulled, you can always head over to Engadget to see it.