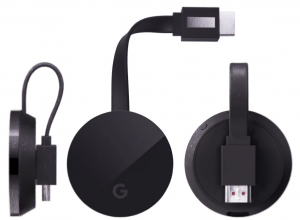 Google has announced the new Chromecast Ultra. Launching in November with a handful of new features, the new tiny device will debut at an MSRP of $69. It’s similar to the $35 Chromecast in shape and function with its small size and direct HDMI plug. However, unlike previous editions of the Chromecast, the new Chromecast Ultra will support 4K Ultra HD resolutions as well as full HDR and Dolby Vision.

Users with 4K TVs will benefit with higher resolution streaming and high dynamic range lighting. HDR on televisions is different than the HDR function you find in newer cameras on smartphones. The wider color gamut and higher contrast allows for more realistic images in video.

Google reports that the new Chromecast Ultra is 1.8 times faster at loading media than the previous version and also has an added ethernet port for direct network streaming which can be more reliable in certain situations. We’ll report more as soon as we get our hands on the device.

You can pre-order Chromecast Ultra at the Google Store.