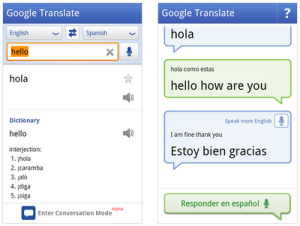 Since it debuted a year ago, Google Translate has been one of those apps that seems a little like magic, especially to those of us who grew up reading about the Babel fish in Douglas Adams’ novels. Google has just released a new version of the app that takes us a step closer to having a Babel fish in the ear.

Conversation Mode, an “experimental feature…in its earliest stages” is currently only available when translating between English and Spanish. The first speaker hits the microphone button, speaks in her language, and Google Translate speaks the translated phrase. The other person can then speak in the other language, and so on, allowing a conversation to take place. Tough to describe, a littler easier to understand in this demo from a few months ago:

In addition to Conversation Mode, the updates to the app include: