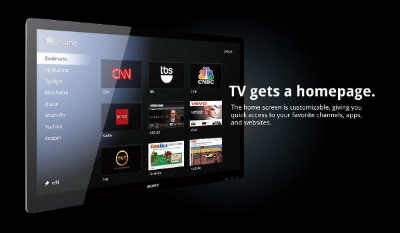 Last week we received an official blog post from Google about the new and revamped Google TV 3.1 and now it’s rolling out to Sony Internet TV’s as we speak. It’s not completely vanilla Google TV running on Sony Internet TV, they’ve added a few apps of their own, included the famous app called TrackID. I doubt the use of a Shazam competitor on a TV but it’s cool nevertheless. Press Release below.

[spoiler]SAN DIEGO, Oct. 28, 2011 /PRNewswire/ — Sony Electronics today announced a software update to the Google TV™ platform, which powers the unique entertainment experience found on Sony Internet TV powered by Google TV and the Sony Internet TV Blu-ray Disc™ player. This latest version not only powers existing Google TV features, but also adds the Android Market for apps, which at launch includes hundreds of apps, including many designed and optimized for television. This update will roll out to all connected Sony Internet TV devices by early next week.

Sony released the world’s first TV based on the Google TV platform in the U.S. last October – today’s update brings a simpler and clean interface, improved performance, better search functionality and the Android Market to all currently installed Sony Internet TV and Sony Internet TV Blu-ray owners. Additionally, future consumers of Sony Internet TVs and Blu-ray Disc players will receive the update during the initial start-up installation. Other new benefits include better integration with Android™ and iOS devices, like smartphones and tablets.

“Connected experiences are a pillar of Sony’s value to TV consumers and Sony Internet Television powered by Google TV certainly brings ‘smart’ connectivity to the highest level,” said Steve Haber, EVP, Sony Electronics. “We very much look forward to the possibilities the Android Market will create for customers to personalize their experience. Users will enjoy the new features that this update brings to their interactive engagement with home entertainment programming, either through Sony Internet TVs or Bu-ray Disc players.”

The Sony Internet TV powered by Google TV brings more entertainment choices to TV every day with unprecedented viewing options from cable/satellite or internet based services. Whether it’s favorite network shows, movies, YouTube™ and other online clips, or the latest cool new app – whatever you want to watch, whenever you want to watch, it’s all on your Sony Internet TV powered by Google TV.