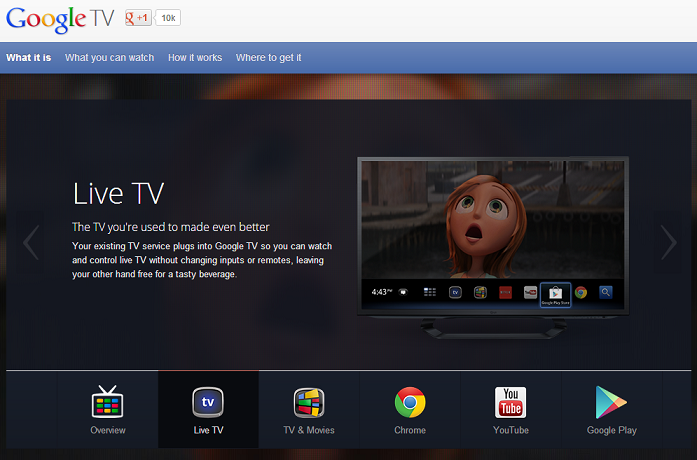 During last week’s podcast, we talked about what we were expecting to see at Google I/O this year. One of the predictions from yours truly was that we would see some Google TV love, and that Google wasn’t anywhere near ready to give up that baby. Fast forward to yesterday, and Sony announced a new Google TV set-top box, which looks  really cool. Now, The whole Google TV site has gotten an overhaul, and we’re starting to think that Google is trying to dig this platform up from its proverbial ashes and get it back on track.

The site overhaul includes a new landing page, along with some descriptions as to how GTV functions. A page dubbed “How It Works” goes further, explaining the differences between what we all know as Google TV and a new “buddy box” style.

To go along with all of this, the site is now displaying some Google TV hardware, including the previously mentioned Sony internet Player (NSZ-GS7); the Logitech Revue, however, is noticeably absent. Logitech’s revue has been, since inception, one of the cheapest and easiest ways to get hooked up to Google TV. With it not showing on the page, this is just another sign that Google is trying to move on from what people traditionally know as Google TV and step the platform up to a new level.