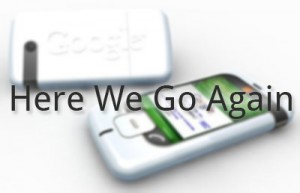 An “exclusive” article over on TheStreet claims that Google is actually in the hardware business after all.Â  Yep – according to them, Google has plans to develop their own handset and release it to the masses.

In what is likely to be seen as disruptive to the wireless status quo, Google is working with a smartphone manufacturer to have a Google-branded phone available this year through retailers and not through telcos, according to Northeast Securities analyst Ashok Kumar, who has talked to Google’s design partners about the plan.Â  If talk of the Google phone plan is true, the entrance of a unlocked, low-cost, Web-friendly touchscreen device will probably undercut other Android phone efforts by players like Motorola, Samsung and Dell.

For nearly two years now, we’ve heard and reported that Google has no plans to get into the hardware game.Â  With so many partners in the Open Handset Alliance and scores of other companies jumping on the bandwagon, this seems totally unnecessary to us. Why would they want to cut the feet out from under people like Motorola?Â  Deliberately going after companies looking to Android to completely revitalize their business sounds like shady, “evil” stuff.

We’re hoping that some signals were crossed along the lines.Â  Perhaps someone was confused with all this recent “Droid” news.Â  Maybe, just maybe, someone thinks that the Droid is a Google branded phone.Â  It wouldn’t be the first time people were mixed up.Â  A year ago, everyone thought the G1 was a Google Phone or that Android was 1 handset.

“It’s a bit of a departure from Google’s strategy, but I think the speculation is valid,” says Michael Cote of the Cote Collaborative. And as for getting the phone to the market quickly, Google “would probably use a partner they are familiar with.”

Let’s assume this is true.Â  What is your reaction to the news of Google looking to create their own phone?