If you are not the owner of a Nexus or a Pixel device, then you probably stuck waiting for updates months on end after Google officially rolls out a new build. But as you’d expect, the search giant is well aware or the state of things and not particularly happy with the situation.

But starting with the Android O release coming later this year, Google plans to incorporate a modular base called Project Treble into its OS that could expedite the arrival of software updates on existing devices.

Based on feedback from device makers, Google notes that the current process of updating to a new Android version is extremely time consuming and costly, as it does not only imply implementing new code and optimizing the hardware to work with it, but also additional approval rounds. The whole procedure is outlined below: 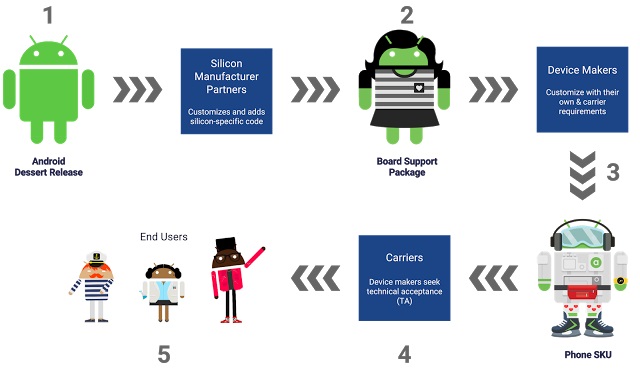 After Google pushes out a new release, chip makers like Qualcomm or MediaTek have to modify the script for their own hardware, after which they pass it to device makers that incorporate the new software, as well as making their own set of changes. The next step is for OEMs to get approval for carriers before the update is finally send out. This complex queue of procedures ensures that updates reach end-users extremely late.

But with Project Treble in place, things could be a lot more straightforward. Google touts it as the biggest change to Android’s system architecture, as it aims to separate low-level code written by chip manufacturers from the Android OS codebase. This will in turn allow OEMs to send out updates by updating only code relevant to the OS without additional input from the silicon makers.

To achieve this end, Android will gain a new “Vendor Interface” which will sit between the Android OS framework and (Original)Vendor Implementation (device-specific, lower-level software written by most chip makers). While smartphone manufacturers, will still have to add their own features on top of the new Android release, Project Treble aims to bypass some of the steps that rely on chip makers’ assistance.

Google also notes it’s working to get its chip and OEM partners to bring their code changes, including bug fixes and new enhancements to the common Android Open Source Project codebase.

Project Treble is already available in the first developer preview of Android O on the Pixel and Pixel XL. It will also be onboard all new devices launching with Android O out of the box.