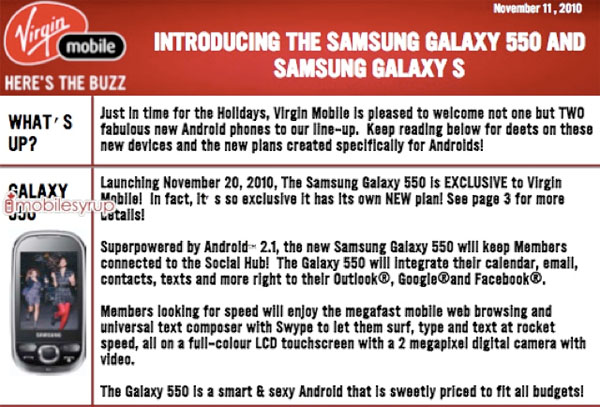 Virgin Mobile, feeling left behind, finally decided to get more new Android powered smartphones. Virgin just announced they are ready to release the Samsung Galaxy 550. The Galaxy 550 sports a 2 megapixel camera and running Android 2.1 and will be released soon in Canada.

Now it’s not the best phone out there, it’s an economical choice according to Virgin who is launching this phone with their new plan.  For $40.00 customers get 300 anytime minutes, unlimited local calls, free nights/weekends, 100mb of data and the choice of unlimited text or voice mail.

The Galaxy 550 features a 600MHz processor with a 2.8inch touch screen and FM radio. Being called a low-end phone the Galaxy 550 sports some impressive hardware for the price. Weird how it is economical and Virgin says how affordable the Galaxy 550 is, yet the retail price has not been released. Fellow Canadians keep your eyes open for November 20th release.