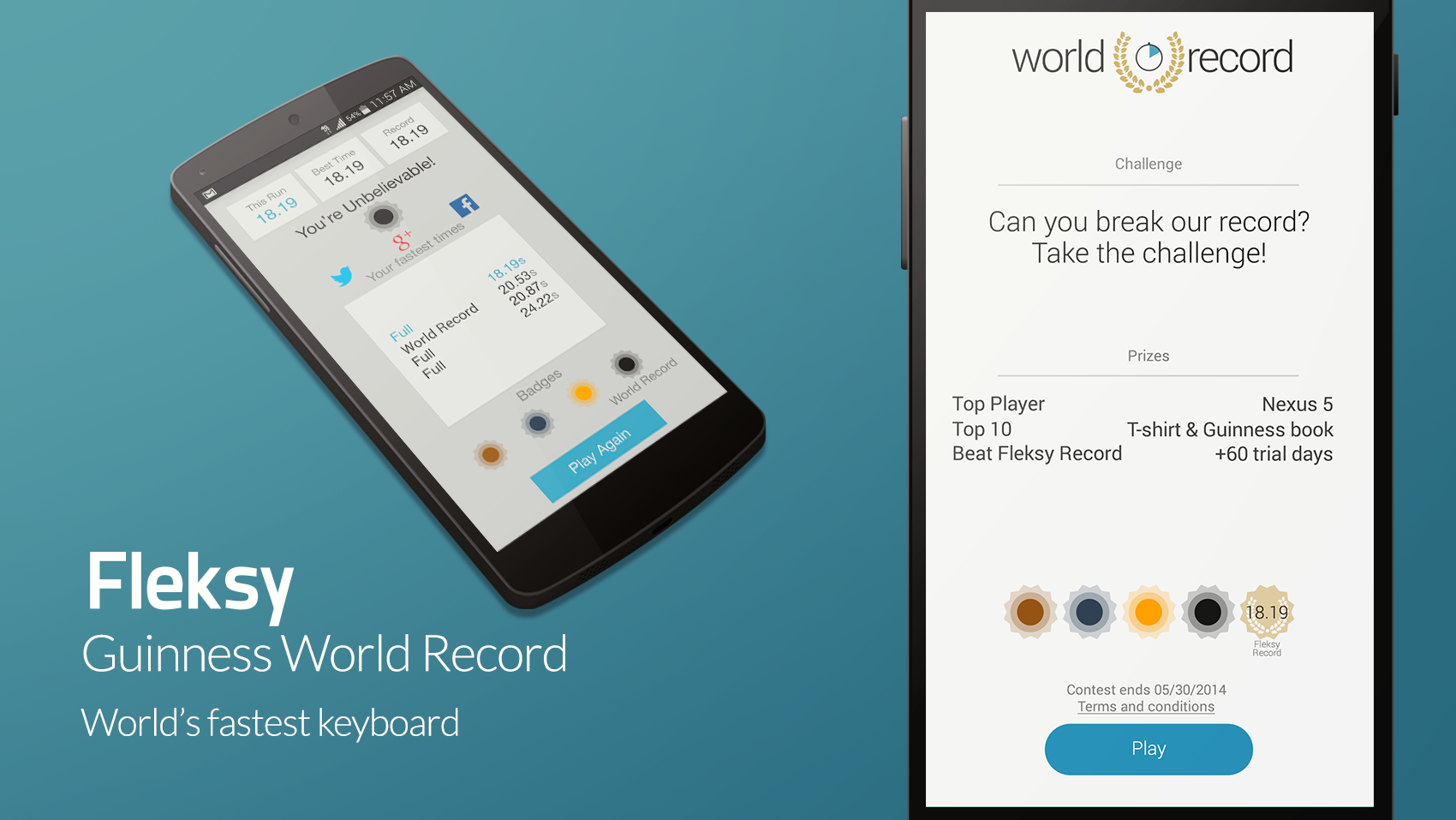 At AndroidGuys, Fleksy is one of our favorite keyboards to use on our mobile devices. It’s one of the fastest growing keyboards out there, and their progress is absolutely getting recognized worldwide. The new world record, typed on a Fleksy Keyboard, was set by Marcel Fernandes in 18.19 seconds. Here’s the record-breaking sentence:

The razor-toothed piranhas of the genera Serrasalmus and Pygocentrus are the most ferocious freshwater fish in the world. In reality they seldom attack a human.

Fleksy is here to announce a little more than setting a new world record. New updates are pushing out to the Android app allowing users to try to break the “World Record Challenge” themselves. It will also be 50% off until May 29th, rendering it only $1.99. If you’re still on the 30-day free trial, two more weeks will be added to your version.

This is some well-deserved, great news from Fleksy. If you haven’t yet tried the keyboard, head to the Google Play link below to try it! Also, catch the press release below.

Fleksy, the award-winning touchscreen keyboard company, today announced that it just broke the Guinness World Record for fastest texting on a touch-screen mobile phone. Marcel Fernandes, a longtime Fleksy user, broke the record in New York City with a time of 18.19 seconds at an official Guinness event, making Fleksy the fastest smartphone keyboard in the world.

Fleksy takes the coveted title while introducing its much anticipated next-generation accuracy engine on both mobile platforms. The new Fleksy engine features improved correction accuracy, including space error corrections and an improved language engine for its award winning keyboard. The previous record holders were Microsoft and Swype.

“We’ve been passionate about building the most comfortable, beautiful, and fastest smartphone keyboard ever since we started” says Ioannis Verdelis, Founder and COO of Fleksy. “The Guinness World Record is a great testament to our progress, and we are pleased that our latest improvements make Fleksy the world’s fastest keyboard for smartphones.”

To support Fleksy’s Guinness World Record-breaking speed, the team has released updates to Fleksy for both Android and iOS. Both apps feature the most accurate Fleksy Engine yet. The iOS update features 6 new languages, and the Android app includes a new World Record Challenge, allowing Fleksy users to beat Fleksy’s own record and win badges and prizes.

Fleksy for Android will be 50% off in the Google Play Store until May 29 and all previous free trials will be extended until May 29. “We’ve made a lot of improvements to our product in the last months, and we want to give everyone the chance to try the world class technology we’ve been building” said Kosta Eleftheriou, Founder and CEO of Fleksy.

Fleksy is a revolutionary keyboard powered by patent-pending technology that makes typing on any device fast, accurate and so easy you can type without looking. Its unique language algorithm founded on Geometric Intelligence moves beyond text prediction and autocorrect to give a much more accurate and easier typing experience than other keyboards.

Winner of the 2013 CES Innovations Design and Engineering Award, Fleksy is the first keyboard app to be demonstrated on a 3D gesture system (Leap Motion); the first to be demonstrated on a smartwatch (Omate) and the first to arrive on iOS. Fleksy’s award-winning design and technology is backed by venture capital firms including Highland Capital Partners and Kleiner Perkins Caufield & Byers. To learn more about Fleksy, visit http://www.fleksy.com.