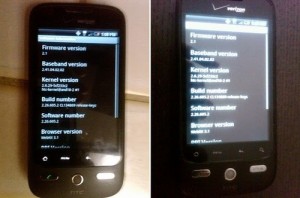 We’re hearing from a number of places that some Droid Eris owners are getting an OTA update.  The good news is that this is the Android 2.1 update they’ve been waiting for.  The bad news is that it appears to be nowhere near complete. According to reports, Sense UI disappears, users cannot log into their Google accounts, and apps and data is being wiped. Verizon tells Engadget that “the Eris update to a ‘newer’ Android is still in testing and hasn’t yet been officially released.” Sounds like something slipped through the cracks and has affected a few folks.

For now, Droid Eris owners are advised to back up anything vital to the memory card or put it in the cloud.  Also, be cautious of any updates over the next few days.

Thanks to everyone who sent this in to us.