I have tried some of the other browsers on the Android Market but always come back to the standard built-in one. I liked Silver but it didn’t feel like it gave me enough bang for my buck. I’ve always enjoyed Opera but never took it seriously enough to install on my G1. It seems my default browser is in for a battle though on word that Mozilla Firefox is going mobile.

Mozilla CEO John Lilly recently said that “Mozilla will release Firefox for Windows Mobile and then Android.“ Straight from the foxâ€™s mouth! Lilly went on to explain the reason behind the jump into Android and what we can expect. Googleâ€™s release of an Android NDK which uses C/C++, the language Mozilla programs in, was the key that opened up the possibility to develop Firefox for Android. Â As far as what to expect does Javascript, CSS, Flash, SVG, add-ons, as well as video and audio excite you? “We [wanted] to build a browser that [does] everything,” Lilly said. 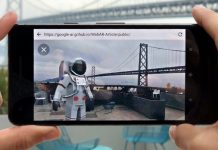 Google reveals tool that brings AR to your web browser