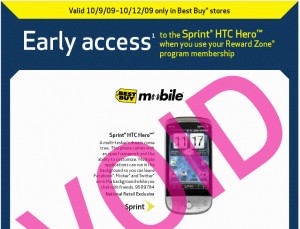 Those of you interested in picking up an HTC Hero from Best Buy might want to clear your schedule for Friday morning.Â  Rather than waiting until this Sunday morning (11th) to get your phone, whip out your Rewards Zone membership card and grab one on your way to work! This way, you can show it off to your co-workers and get them whipped into a jealous rage.

We were hearing from a few of you that this was rumored so we asked our twitter followers for some clarification.Â  Thanks you guys we were able to get to the bottom of it. Various sources are telling us that their local store expects to have a handful ready to go on Friday for Rewards Zone members.

Also called BB. Guy said all pre-orders are guaranteed. BB in Chicago only getting 11 Heros-only 9 are avail to RZ peeps on 10/9 – Kyle Pozan (twitter)

Just confirmed it on the phone with Best Buy. RZ members get the HERO on the 9th! Booya! – Big King (twitter)


The only thing we don’t know definitively is whether or not you need to have the flier on your person when you walk in the door.Â  Our best guess is that it’s not required and that Best Buy reps should have plenty on hand that morning.

There are now two incentives to buying your Hero from Best Buy.

Grab an HTC Hero for $179.99 with a 2-year contract starting this weekend!